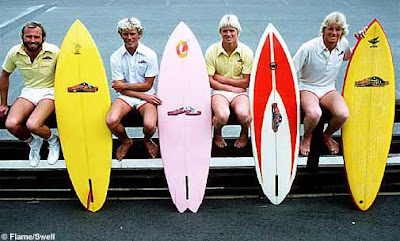 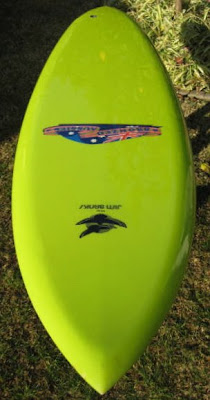 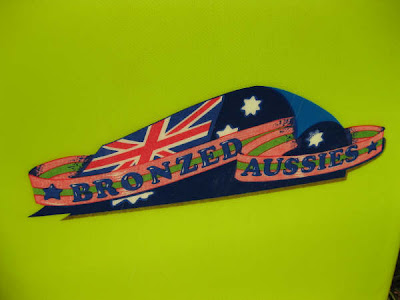 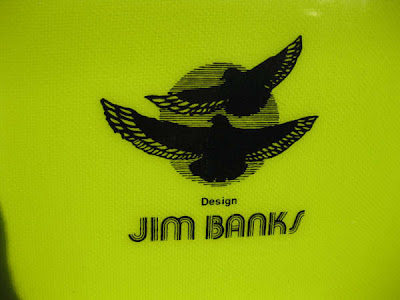 Following my posting about the 'Bustin Down the Door' movie and the Bronzed Aussies impact on professional surfing James from LA sent me these pics of his recent find. A Jim Banks model single fly, rounded pin single fin with an amazing green pigment gel coat in absolutley mint condition. He says hes not trying to make anyone cry. I say too late James!
I have reposted (without permission) a superb piece on the history of the Bronzed Aussies from www.surfline.com to give you a better appreciation of the importance of his find.

Formed in Australia in 1976, the Bronzed Aussies were surfing's first commercial ambassadors in the predawn era of professionalism. The brainchild of Sydney Daily Mirror journalist Mike Hurst and three of Oz's top pros at the time, Mark Warren, Ian "Kanga" Cairns and pink fetishist Peter Townend (nee "PT"), the group took their name from an old adage for sun-baked beach boys and their inspiration from the '60s cadre of Aussie tennis players -- Rod Laver, Roy Emerson, John Newcombe -- who'd barnstormed that sport, raising both the financial stakes and media awareness tenfold in the process. Specifically, PT cites authors Jane and Burt Boyar's document of that tennis revolution, World Class, as something of a reference manual to the Bronzed ones.

"We felt collectively we would have more success in the mainstream media as a group, and we did." says PT, now publisher of the Surfing Group in San Clemente. "We got a lot of mainstream media attention. The fluctuating fortunes of winning or losing didn't rest on one guy's shoulders. If Mark Warren won, all Bronzed Aussies benefited. If I won, same thing. The idea was to create a team that would always exist," he continues. "It would roll over like the Harlem Globetrotters. There would always be new Bronzed Aussies."

Very much the forerunner of today's surf teams (i.e. Team Quiksilver), the media savvy BAs trademarked their Aussie wave logo and plastered it on everything they rode and wore -- boards, trunks, sleek jumpers, Fred Segal embroidered jackets, etc. In an age when soul was still of the essence, squad members were happily exploring other realms. Both PT and Kanga stunt-surfed for characters in John Milius' 1978 coming of age epic Big Wednesday, and later, proverbial world champ bridesmaid and member Cheyne Horan eventually plugged Sunkist soda in TV spots.

However blasphemous those profitable exploits were to some (laughable really when compared to Slater's "Baywatch" tenure), and the backlash was swift, the BAs backed up their image by repeatedly kicking global ass on the then-fledgling world tour. PT and Cairns were one/two the first season, and the guys in general charged intently on the North Shore.

Townend is typically humble in detailing the BA's water prowess. "We went out every day and surfed as good as anyone. Mate, I wouldn't have been on four covers of Surfer and Surfing if I wasn't backing things up with good surfing. The winter I was declared world champ, if they'd had a Triple Crown, I would have been Triple Crown champion."

However conceptually progressive, the brand proved fiscally nonviable. By late 1980, the guys could no longer afford to sink anymore of their own money into the group, and the team folded. PT admits he "lost a f--king lot of money." Despite initial hopes that generations of Aussies would wear the logo with pride, there would only ever be six Bronzed Aussies: Warren, Cairns, Horan, Jim Banks and a relatively obscure two-time Australian junior champion named Steve Jones. Trivia buffs should note that when first conceptualized, the original crew was to be a quartet, but eventual four-time world champion Mark Richards ("MR") declined the invite.

Among those most notably absent from the contingent was 1978 world champ Wayne "Rabbit" Bartholomew. Many of today's teams market a specific image -- Volcom is punk rock, O'Neill is soulful, etc. -- but the Bronzed Auss
ies had a target audience and the ideal candidate for achieving their goals wasn't always he who surfed best. Rabbit wasn't deemed BA material because "he didn't fit the mold," but those who did were expected to follow certain guidelines to ensure optimum marketability.

In a 1982 Surfing magazine interview, ironically the publication PT now heads up, Banks described the group as something of a dictatorship, saying, "There was a pressure from them to surf in a certain way, one which they felt would get better competition results. I think [the BAs] slowed down my surfing."

Townend defends any tyrannical element as necessary. "There were definite ground rules," he says. "We were the forerunners of building a brand. Bronzed Aussies was a brand. We created the trademark and the team was the promotional entity for the trademark. It's no different than today. It was an endorsement."

Cheyne Horan's career with the Bronzed Aussies would prove most interesting. Brought on as a teen to replace the departing Warren, the oft-zonked Horan broke his contract in 1979 and, in doing so, altered the course of professional surfing history. Not long after walking away from the BAs (an acrimonious split that nearly ended in a lawsuit), Horan found himself one heat away from the world title. Were he to win his semifinal heat at the 1979 World Cup at Haleiwa, he would be crowned champ. His opponent: one very pissed off Peter Townend, who might otherwise have taken a dive for the team's greater good.

"I kicked his ass," PT says. "Then MR had to beat me in the final and he did. I don't think [Horan] ever got over that." All told, Horan would finish in the runner-up slot four times.

Ultimately, one could argue the Bronzed Aussies were seminal figures in surfing's ascension to mainstream acceptance. Certainly they were prognosticators of the commercial boon of the '80s. Though subsequent, non-BA related tiffs have somewhat fractured the relationship between Townend and Cairns, the guys all remain mostly friends with the original trio reuniting in 1997 at the inaugural ASP Masters event at Tavarua.

PT estimates he lost close to $100,000 in the experiment, but hardly regrets altering the public face of waveriding. "I'm proud of my contributions to pro surfing," he says. "Bronzed Aussies had a huge impact on raising mainstream recognition of surfers as legitimate sportsmen. Look at Tony Hawk. Skateboarding has left surfing behind because of Tony Hawk's ability to step beyond that little insular, clique-ish, community and develop video games and become larger than life."
5 comments: