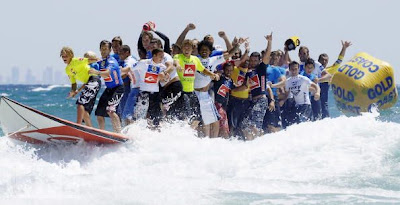 Gold Coast shaper Nev Hyman is an important surfboard design innovator and has been involved with virtually every major phase of short-board design, from the birth of the thruster to evolution of computer shaping. He's been involved in the development of Firewire surfboards and more recently Surfburger technology that involves a combination of the epoxy resins, parabolic stringer and vacuum sandwich construction. Among his many great achievements he also holds the dubious title of man who built the world's largest surfboard.
So I was stoked to get my hands on this flouro painted 80's classic hand shaped by the master himself.
Its a 6'2" channel bottom thruster with adjustable centre fin box and surfs as good as the day it was made. 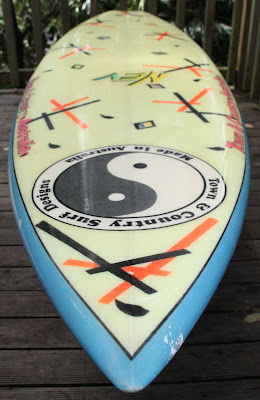 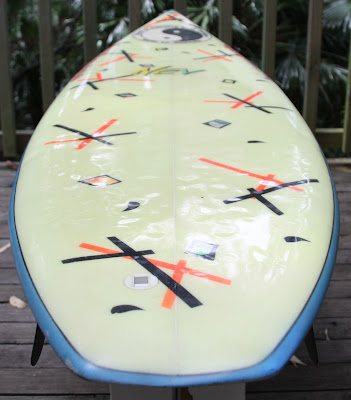 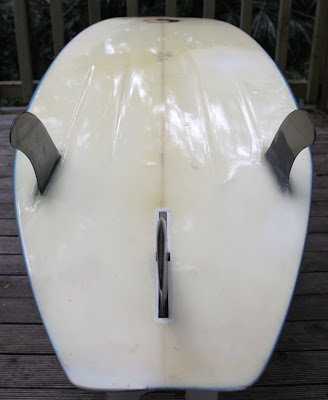 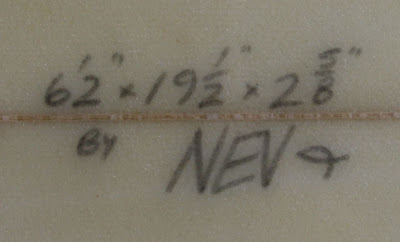 Around the same time I picked the T&C I sold 2 old boards and bought a brand new contemporary shaped board, coincidently, of similar size and dimensions.
Now, I might collect old surfboards but I'm no nostalgia nut. I'm interested in the history of surfboard design only in the way it relates to the evolution of modern surfboard design. I am equally into surfing on old boards as I am into surfing on the most up to date, cutting edge, design and technology I can get my hands on. I don't want to bad mouth anybody, so I wont mention the brand or the shaper whom I paid recommended retail $770 for my new board. But after 3 surfs the deck of new board is covered in compressions and the FCS plugs have cracked through the deck. I'm not the most radical surfer, I don't thrash boards. I'd say the best you could say about my surfing style is 'competent' and 'conservative'. I have surfed the T&C exactly the same number of times and I haven't put a mark on it (except the rail shatter from when it fell over while I was taking the photos) and its about 23 years old!
To be fair, I weighed the boards as best I could with my kitchen scales.
The OLD board (the T&C) weighed 3.7kg with no wax and no leg-rope.
The NEW board weighed 3.1kg with no wax and no leg-rope.

600 grams might sound like a lot when talking about the performance of a surfboard but my body weight has changed 5kgs since Xmas!! Hows that going to affect the boards performance?
My question is- with all the improvements in surfboard construction technology why does a polyester resin surfboard built 20 years ago last so much longer than one built this year thats hardly going to last the summer? 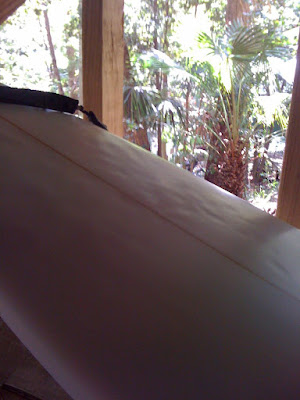 Rasta's is an experienced board builder who has contributed to this blog before with valuable insights. He has witten to me with a comment that is so spot on I'm adding it to the post.-

What a topic...its the proverbial pandora's box...new polyester boards can be strong ,light and durable if the foam is of good quality, not over shaped, well glassed,reasonable filler coat and not over sanded...what you discovered is my lament as well being aboard builder...many times all the individual guys who work on these new boards have no idea who the customer is, what the shaper wanted, is the guy heavy front foot surfer, back foot surfer, dodgey knee get up and so on...basically some manufacturers dont give a shit as they will never see the customer again and it becomes some one esles problem later on...particularly guys like us who have to fix these pieces of crap...i enjoy nothing better than when a guy comes in the one of my old boards that's 10 years plus old and still going strong...good boards are made by a complete team of guys shaper, sander,glasser, glosser,fin man etc. and know the customer...but dont forget there were some old crap made too...its all about materials,pride and craftsmen...Rasta