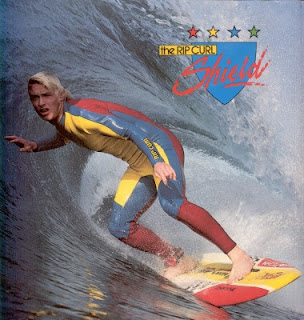 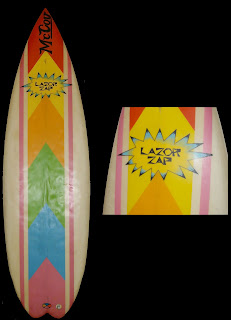 The Laser Zap is one of the most interesting designs of the innovation period. It either powered Cheyne Horan on to or held him back from, being runner up to 4 World titles. A no-nose, wide tailed single fin board designed by Geoff McCoy and Cheyne Horan, 1979-1984.
Later models featured Ben Lexan/Cheyne Horan’s Winged Keel/Star fin.
Here is my Geoff Mc Coy shaped early 80's Laser zap. Note the super wide tail and needle nose. This one is not even as extreme as the ones Cheyne Horan rode in competition.
My favorite piece of Laser Zap history is in Scott Dittrich's movie : Follow the Sun from 1980. It include includes Cheyne Horan on a 5 ft 6'' Lazor Zap at 15 to 20ft Waimea Bay.