As if just to prove my own statement wrong about Wave Tools twin fins not existing outside of Newport Beach, I went and found an old email sent to me by Fred from France with pics of his original 80's Preston Murray model Wave Tools twin fin and original ad from the time.
He tells me he  bought it in a Spanish surf shop called Pukas in San Sebastien around 1983. You can see the latter introduction of the flyers that took some area out of the tail to let the boards hang in there a bit better through the turns. 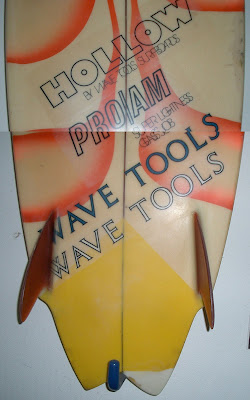