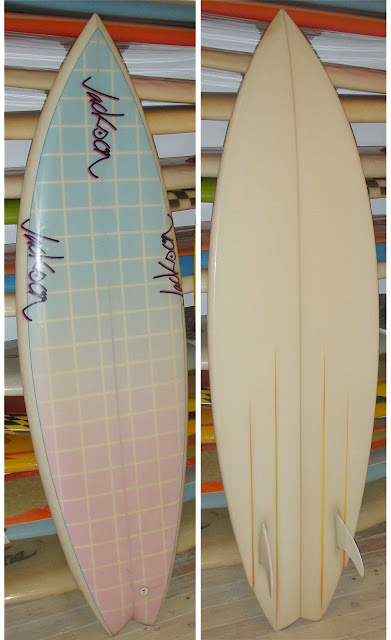 I have surfed this board 100's of times and it still looks brand new. It looks like a modern day reproduction of a twin fin but its not! Its a 6'2" single fly, swallow tail twin, channel bottom, twin fin by Jackson shaped by Jim Parkinson in 1981. It has an unbelievably hard and heavy gloss coat that appears virtually indestructible.
In about 1982/83 many surfers became obsessed with the new 'Professionalism'. Everyone wanted to look like a pro-surfer. They started wanting super light boards with wafer thin glass jobs, they started putting big logo stickers all over their boards, even when they weren't sponsored. They stopped getting decorative sprays on their boards and ordered all white boards. They stopped being interested in innovating designs and they all wanted to ride the same 3 fin board design.
The equivalent would be if all musicians suddenly lost interest in their own genre, rock, folk, country and all wanted to sing Britney Spears pop songs.
Sadly the 20 years after 1985 barley produced a board worth keeping. Most of the good boards have snapped, the rest have fallen apart or they are so boring they are not worth keeping.
Thanks to www.aquabumps.com for the photo.