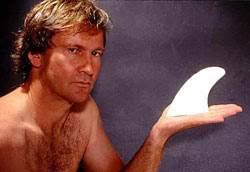 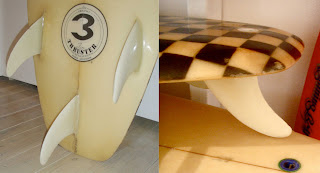 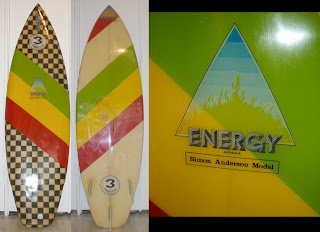 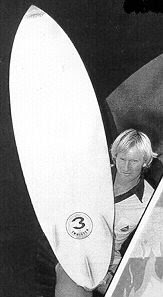 The most far reaching design development of the innovation period was Simon Anderson's 3 fin 'Thruster'.
In 1981, when most boards had only one or two fins, Simon came up with the idea of putting a third fin at the back of his board. This paid immediate dividends as he went on to win three contests that year: the Bells Beach Classic (in the biggest waves since 1965), the Coca Cola Surfabout and the Pipeline Masters. Today 99% of the worlds touring pro's ride this design.
This one here has a great checker board spray but more importantly you can see that the back fin protrudes beyond the tail (just). That means it was one of the first thrusters sold as Simon changed the design soon after cutting his foot on the trailing back fin.
The important thing about the thruster design is not that Simon surfed well on it, as Cheyne did on the Laser Zap, but that everyone surfs well on a thruster.