I'm pleased to share with you my recently acquired (birthday present to self) 6'2" by 19" 1/4 single flyer swallow tail Ocean Pacific twin fin shaped by Mauricio Gill in 2004 for the then Op Creative Director.
This board is neither collectible, valuable or historically important but it does have the following points in its favor.
1) Its a 6'2" twin fin, my weapon of choice.
2) Its high polished gloss black.
3) It has never been ridden (the leg rope plug was still taped up).
4) It has 2 big Op labels under the glass and Op boards have always looked cool.
Ocean Pacific was originally started by John Smith in the 1960's as a true surfboard brand. Smith designed the original trademark and label for his surfboards, which he sold out of his shop North (San Diego) County Ding Repair shop in Leucadia. He sold the Ocean Pacific label to Don Hansen of Hansen Surf Shop in Encinitas. In 1972, Jim Jenks acquired the name from Hansen and the Ocean Pacific apparel line was created and things slowly spiraled down hill from there, except for the fact that they continued to produce beautiful high quality surfboards, many of them airbrushed by Bill Stewart and Jack Meyers, for use as in store displays. 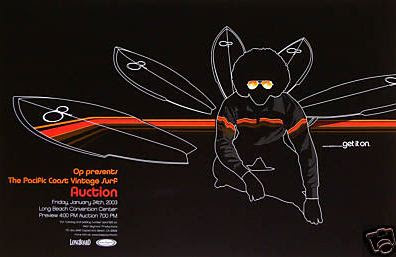 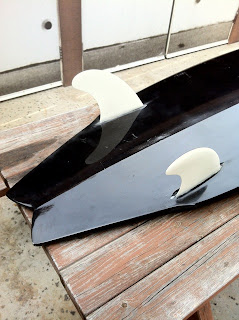 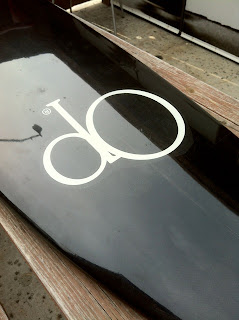 Op continued to be involved in some important chapters in surf culture through the 80's and 90's such as their ongoing support of Tom Curren despite the fact they were no longer a credible surf brand and their hosting of my all time favorite pro surfing comps, the 1986 Op Pro at Huntington beach California and the 1986 Op Pro at Bondi.

Allegedly it was a couple of girls taking off their tops that caused the riots at the Op Pro in Huntington. Strangely the Op Pro at Bondi the same year had topless girls walking around through the crowds and posing with the pros without causing any such violence.