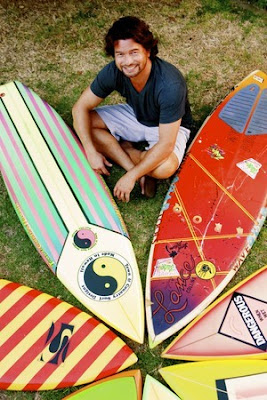 Local surfers and other beach lovers will be stoked about an exhibit coming to Bloomingdale’s Santa Monica called “The Epic Eighties,” which features a unique collection of vintage surfboards.
The sport of surfing has always influenced music, literature, jargon and, of course, fashion, so Bloomingdale’s seemed like the perfect venue to pay homage to this colorful time in surfing history.
“The 1980s are very relevant right now in fashion, with a lot of 20-something kids really into the looks of the eighties. But also a lot of surfboard designs have now gone back to those eighties templates,” said Kristopher Tom, surfboard collector and exhibit curator. “So the exhibit will feature 15 vintage surfboards from 1981 to 1989 with everything from really ugly neon to bright, beautiful boards and everything in between.”
One of the gems of this surfboard retrospective is a brightly-colored, neon 1982 Peter Schroff twin fin in pristine condition.
“If I had to pick one board as my favorite, that would probably be it,” Tom said. “Especially since I know Peter pretty well and he’s a super sweet guy. Plus his boards were very influential in shaping that period.”
Tom, 41, started surfing as a teen in 1985, but didn’t combine his quest for the perfect wave with his quest for the perfect vintage surfboard until the 1990s.
“I started collecting about 1992. I was in a thrift store and I saw an old Hansen longboard sitting there for $25 and it was in mint condition, so I decided to buy it just to ride,” Tom said. “Then all these old-timers started coming around wanting to buy it off me, and I realized that vintage boards were really sought after.”
Tom figured if the “old-timers” were looking for boards from the fifties and sixties, then someday people would be looking for boards from the eighties.
“So I started collecting surfboards from the eighties because I have a passion for that era, since that’s when I grew up,” he said.
Tom has about 50 or 60 vintage surfboards today and 10 of those are included in the Bloomingdale’s exhibit along with others borrowed from fellow collectors. He describes himself and other surfboard collectors as “very nerdy, kind of like stamp collectors.”
“We just happen to have a really cool sport associated with what we collect,” Tom said.
When the Mar Vista resident isn’t surfing the waves--or surfing the Internet for another vintage surfboard--Tom is an educator for a private consulting firm that works with various public school districts.
He says love brought him to Mar Vista when he moved here three years ago.
“I fell in love with my wife, Stacie, who already lived here, and I fell in love with the area and I thought, you know what, this is a perfect match,” Tom said.
“I think for people who are in their 30s and 40s, this exhibit is going to bring back a lot of nostalgia for them,” Tom said. “But any shopper coming into Bloomingdale’s, if they have any sort of connection to the beach, they’re going to be attracted to this display because all these boards have so much color and personality.” 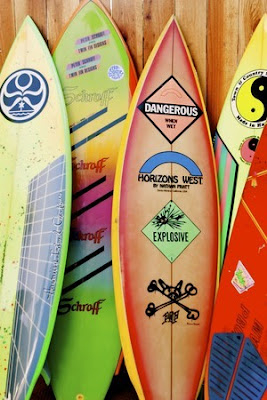