I was very excited to get my hands on this 6'2" MR twin fin I found in North Carolina. It was shaped in 1979 by Robin Prodanovich at the Gordon and Smith factory in San Diego. Robin shaped at G and S for 9 years and worked closely with Mark Richards on this Californian version of his twin fin design. He later went on to found his own label and shape for Nectar, Linden, Rusty, Local Motion and South Coast Surfboards.

I've been riding the board and it goes great. The wide point is a little furthur forward than the later twin fins in my collection, which I really like. More width and foam under your chest picks up waves really easy and the narrower tail is a little stiffer but can be pushed a lot harder through the turns. In that way it is a lot like my Bob McTavish shaped Sky twin fin that can handle some really big waves.

In Simon Anderson's book 'Thrust' Mark Richards says "I never really understood why people had trouble with twin fins. It seems they were under the misconception that you have to nurse them or they would spin out, but in fact the harder turned the better they held in, especially in hollow waves. It was a bit harder on a fat wave, you had to be more careful how you set your edge. The big thing people had trouble with on the twin fin was surfing backhand, and that might have been what brought the popularity of them undone. Backhand it was hard to get them on a rail, but once you did it was fine.
It surprised me that a lot of good surfers didn't really like them. There were a lot of really badly designed twin fins. To go rail to rail, you needed a really deep vee in the bottom, and a vee that was strategically placed, that started shallow and got progressively deeper between the fins, with a little concave in the bottom of the wing, which gave it like a vee/ double concave thing in that tail area. There was a design secret in making them work. If someone said they didn't like twin fins, if you had a look at them, invariably the bottom wasn't right."

Robin and I have been in communication and he writes-
"There's a lot of history going on with that board; where it was built, who shaped it, the Star Systems fin boxes, etc.
MR was right, back in the day there were so many twin fins that were designed incorrectly and surfed terribly. In fact, we used to affectionately refer to them as "twin spins" because most surfers just hit their bottom turn and proceeded to face plant on the wave because the fins slid out. Not a pretty picture. MR's twins were spot on, the tails were narrower that the noses, the wide points were ahead of center, the fins were back, there was lots of "v", they had a wing swallow tail shape and most importantly, the "v" went into a hooked wing which was critical for controlling drift. Eventually Will Jobson developed the twinzer design with the small forward canard fin, and that allowed for a more modern look to the planlines with the wide point migrating back toward center, more of a thruster look. I have many original MR templates from G&S and the ones with a more balanced nose and tail width do not work as well as his original, more Brewer influenced designs.

I can remember riding one of MR's personal twins back in the day at G&S, probably '78 or '79; the board had "v" running the full length of the 6'0" board, and on my first wave, which was a right, I faded a little to the left into the peak before I started my bottom turn, and the board took off left before I realized what was happening. Of course I fell off but after another wave, I figured the "v" contour out and had a blast on the board. The board was fast and lose especially since I was coming off of single fins...what an eye opener that board was!"

This board is a very good example of what Mark and Robin are talking about above. Deep vee between the fins and some concave in the bottom of the wings. I belive I could really feel these concave wings give a little extra bite and a fair bit more drive. 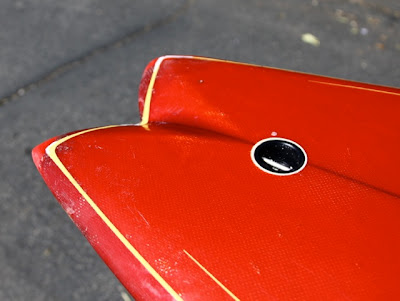 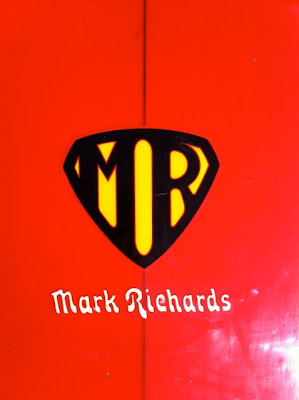 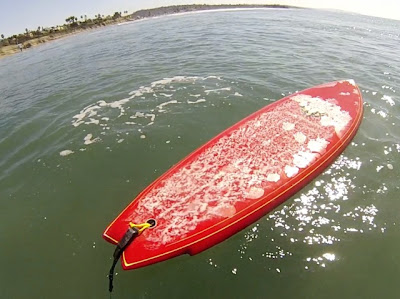 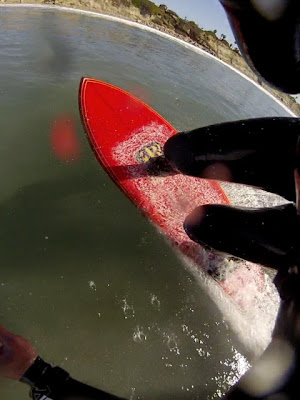 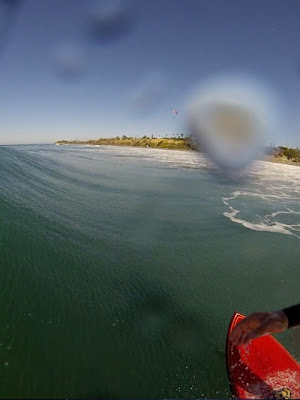