30 years of the Thruster by Mat Warshaw 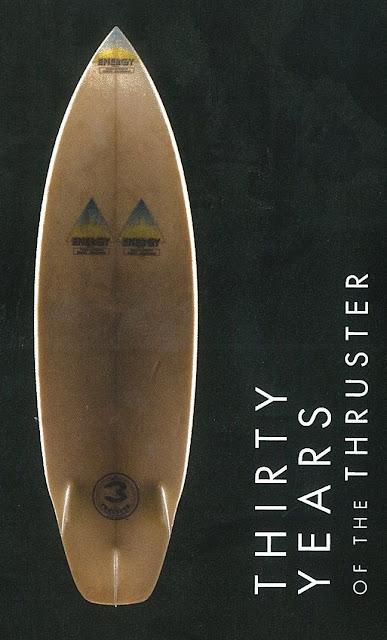 Thruster. Thruster. Yes. Perfect! Thirty years later, ! still get a kick out of the word. Has there ever been a better name for a surfboard design? Miles ahead of "quad" or "channel bottom" or anything else merely descriptive.
None of that grim tight-mouthed machismo, like "gun." All the schoolboy sexual twang of the longboard-era Penetrator-except the Penetrator tag was a marketing ploy, nothing more, while the Thruster was so named, at least in part, because that's how the damn thing actually rode. Piloted correctly, this weird-looking three-finned craft, introduced in 1980, put more speed under your feet coming out of a turn than it had going in.
Thruster inventor Simon Anderson of Narrabeen, a Rushmore-worthy power-surfer, a homebody working class beer-stained bloke among blokes, takes pleasure these days in describing the short but bumpy road traveled before his design gained mass acceptance. The heckling from World Tour peers when he showed up on the beach with a prototype. A trade show where he sat moldering in a convention hall booth for two days and wrote orders for a grand total of three boards. A firstround loss at the Stubbies contest, after he'd vowed to 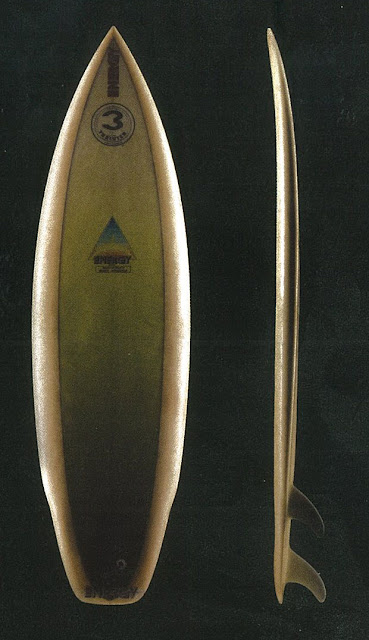 win a big event in order to prove the Thruster's merits to a skeptical-dismissive, even-market. Anderson, normally the embodiment of calm, was nonplussed. "First wave I ever rode on a Thruster, the f-kin' th ing was going ballistic," he later recalled. "But it was a hard sell anyway. Good surfers would sit in the water and look at me funny. Yeah, it rocked me a bit."
Anderson needn't have worried. Even if he hadn't burned rubber over the competition in thundering 12-foot surf at Bells two weeks after the Stubbies, even if he didn't follow up a few months later with a big-swinging-dick Pipe Masters win, even jf Surfing mag hadn't named him 1981's Surfer of the Year-hell, even if he'd called his new design the Flying Bag of Shit instead of the Thruster-three-fin boards were going to rule the sport.
And rule the sport forever, apparently. Drive, speed, all -wave versatility, short-radius turning when needed- Anderson's brainchild had it all. It still does. Sure the tri-fin has been refined and improved over the past three decades. But look at how much it hasn't changed. Thirty years! You know what dudes were riding 30 years before the Thruster was invented? Doors! Coffin lids! Tree branches!
I for one don't much care that Anderson didn't patent that·tri-fin design when he had the chance, and thus lost millions in licensing fees, or whatever. Better for the sport (if not Anderson) that he remain board making's great foam-covered proletariat hero. Somebody once had the noble but ridiculous idea that we should all mail Anderson a nickel, or a dollar, or something, for every three-finned board we buy. How about instead, for this pearl anniversary of the Thruster, we all just raise a glass in salute of the greatest board design to ever roll down the pike.

My 6'0" single hip, rounded pin tail, channel bottom, Energy thruster with the short lived jet fins.
Not all of Big Simon's ideas are good ones. 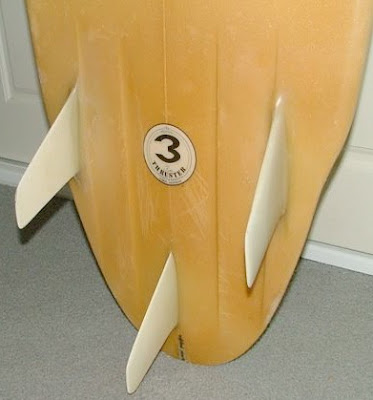