Surely one of the most interesting Energy thrusters of all time is this 5'10", shaped by Simon on the North Shore in 1981, during the first season that he took the new design to Hawaii. This board was latter used by Becky Benson to win the '81 OP pro in Huntington. It looks to have a much narrower tail than any other thruster Simon shaped in 1980 / 81. I'd be fascinated to learn who did the air brush spray job because it is nothing like anything I've seen come out of the Energy or Nectar factories. Of particular interest to me is the hand done Energy triangle logo. I'm not surprised Simon didn't have any rice paper transfers on him in Hawaii, I know I wouldn't have packed any if I were him.

Surely one of the least interesting Energy thrusters of all time is this 6'0" of mine. Plain as she is, I still love her. In fantastic condition for its age it has all the features you'd want in a first generation Thruster created by Simon Anderson, it is the shape that has set the pace for modern surfboard design for the past two generations. Wide tailed wing squash with unique angled channels on the bottom with no less than  8 "Energy" and "Simon Anderson Model" labels.

From PhiI Edwards to Tom Curren, the best surfer in the world rode boards that the typical surfer should have had under his feet as well. But the past decade of pro surfing has, thanks to the SIop Factor, pared down the average size and weight of the top surfers with a ruthless evolutionary purge. Once, Thundderlizards like Simon Anderson and Ian Cairns strode through the pageantry, and average weights were up around 170 pounds. Today, with a climactic shift from
Sunset to Sao Paulo, the scene is fraught with compact little Saurian roosters, 125 to 130 pounds, riding short, ultra-thin, hyper- rockered miniaturized surfboards. Dave Parmenter referred to a trend in which the best surfers in the world had shrunk from the big blokes who pioneered pro surfing, twin fins, deeper tube-riding, and Thrusters-Mark Richards, Shaun Tomson, Ian Cairns, Simon Anderson-to a new era where pro surfers were specialized to the size of gymnasts. The pro surfers of the early 1990s were uniformly small, light, strong, and very fast, and the surfboards designed for them were almost impossibly thin and narrow. And almost impossible for the average surfer to ride.
The Thrust of the Thruster Australian surfer and board designer Simon Anderson proved that it's possible to be too good of a bloke. In 1980, Anderson crafted his Thruster surfboard, a square- tailer fitted with three, small like-sized fins designed to boost the thrust in the board's turns. He promptly scored several contest wins atop his tri-fin, and then won the 1981 Surfabout championship. Yet Anderson neglected to patent his tri-fin design, and it became a gift to the surfing world. The Thruster was adopted and then advanced by shapers around the surfing world. Al Merrick of Santa Barbara added much of the fine-tuning to the tri-fin design; as he admitted in 1987: "I'm a designer but I haven't discovered anything," Merrick was quoted in Matt Warshaw's The Encyclopedia oI Surfing. "I'm just using what's been around before  and I'm sure I'Il take more ideas from somebody in the future"' By the mid-1980s, the Thruster was the board of choice for most every surfer around the globe. In 1986, Tom Curren won the first of three world titles riding a Channel lslands
Thruster shaped by Merrick, winning again in 1987 and 1990' Curren's style set professional surfing on a path it's still following in the 2000s, but his stance went straight back to the mode established by Miki Dora in the l960s: Keep the arms low, the upper body quiet, and let the board do all the moving and talking' Curren's surfing was incredibly smooth, fast, and deep, and his preternatural wave judgment and ocean knowledge inspired writer Derek Hynd to stand up in front of everyone at a Steamer Lane surf contest in the 1990s and proclaim, "Tom Curren is the ocean!" The cutting-edge Thruster shortboard became more refined under the hands of shapers like Merrick and Rusty Preisendorfer in California and the rest is history.
pics and text from Surfboard: Art Style Stoke by Ben Marcus 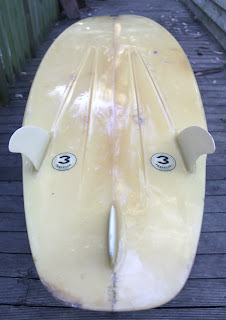 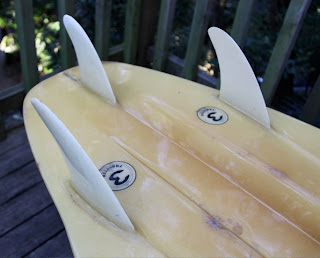 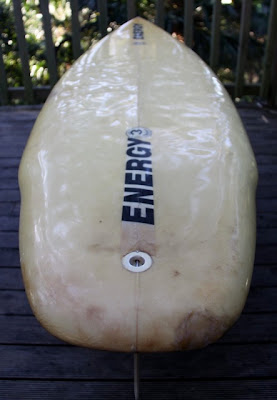 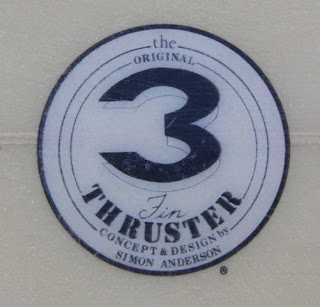 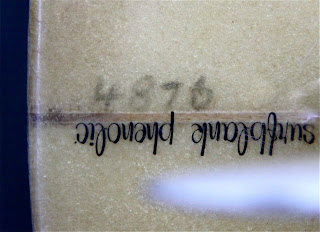 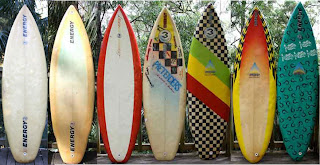