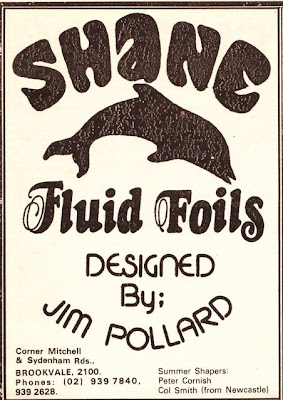 
Geoff Fox from Surf Research is an amazing Australian surf historian who has done an unbelievable amount of work on his web site 'Pods for Primates: A catalogue of Surfboards in Australia since 1900"
Once again his knowledge has helped me learn more about my own collection, in particular about this Jim Polard shaped 'Fluid Foils' 6'0" single fly swallow tail channel bottom twin fin.
Whats unique about this board are its small, sharp raked fins and its four long, soft channels that start 3/4's of the way up the board and run at an angle to the stringer. 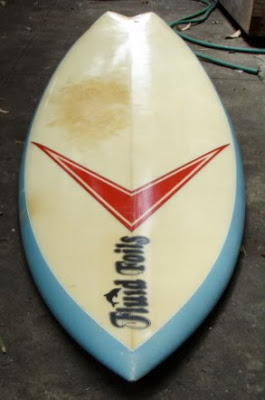 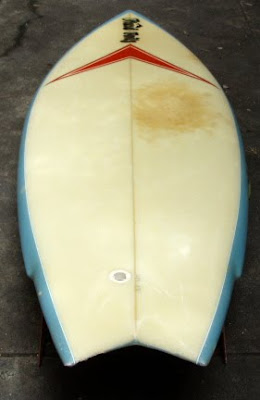 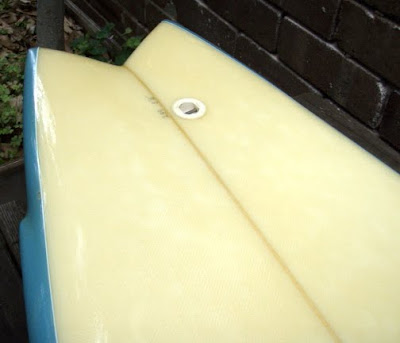 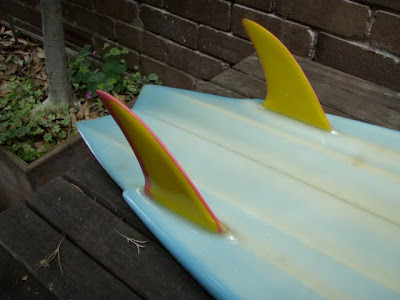 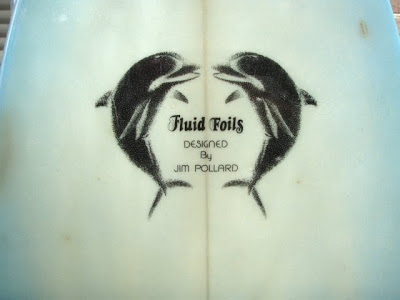 According to Geoff, Fluid Foils was a decal/label used by Shane Surfboards from about 1977-8 for models shaped by Jim Pollard, primarily single fins, but all channel bottom designs.
Jim was originally inspired to try shaping channel bottoms by an article called ''Groove Ridge Theory'' by Jim Richardson and Art Shafer from the USA that was possibly printed in either Surfer or Surfing magazine circa 1975.
It detailed experiments using flexible polyurethane rubber ridges stuck to the bottom of surfboards and concluded that they improved lift and increased directional stability across a range of designs and lengths.
Around 1976 -77 at Noosa Heads in Queensland, Jim Pollard had developed a conventional pintail design with six or eight channels nose to tail, running parallel to the rails and exiting at matching flyers. This model was test ridden by Peter Cornish, Steven Butterworth and Col Smith, all Newcastle surfers. By 1979 the design was modified to straight channels, parrallel to stringer, in the rear 2/3rd of the board, still exiting at the flyers. This design had international exposure with successful
contest results by Col Smith (Newcastle), notably a win in the Pipeline Masters around 1979. The single fin design was manufactured in Australia by both Shane Surfboards, Brookvale (Jim Pollard Fluid Foils) and Free Flight Surfboards, Ballina (Col Smith Channel Designs).
From 1978 onwards channels were a common features on a variety of designs. For example the small flutes on some Mark Richards Twin fins and Laurie/Phil Byrne's more extreme Clinker Bottom Twin fin, circa 1981. (both featured on this blog)
Channels became more subtle features through the 1980's, virtually disappearing from design by 1990, The channel bottom as since evolved into the single and double concave designs we ride today.