In 1981 Jeff Divine took a photograph of Simon Anderson getting out of the water at lower Trestles after surfing his 3 fin thruster design for the first time in the USA.
Its such an iconic image I have long wanted to pay homage to Jeff, Simon and Gary McNabb of Nectar surfboards who belatedly adopted the license for the design in the US and re-create the historic image.
I can remember the by-line in the magazine saying something like "a curious American inspects Simon Anderson's new 3 fin thruster design". 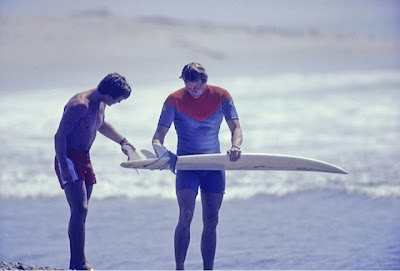 My first task was to secure (and preserve) a US built Simon Anderson model from 1981.
My friend James came good last last year and I'm now able to share with you my Nectar, Simon Anderson 3 fin thruster design from 1981. Big wide square tail, subtle single hips, lots of foam through the middle. The board measures, 6'3" length, XX nose, XX wide point, XX tail by XX thick. Ironically the board came to me with a smaller centre fin, which goes against the definition of a thruster, which is a board with 3 fins of equal size. 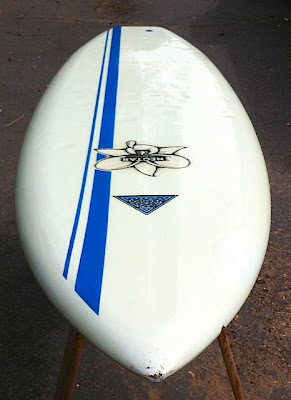 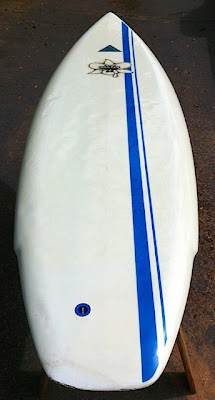 With some time to spare on a wednesday and a nice little swell on its way I loaded up the truck and pointed it north towards San Clemente.
With the sun out and my destination in sight the truck started spluttering and died by the side of the road on the 5, right on the bridge over the Trestles lagoon.

I climbed the hill and found a hole in the fence that protects the Camp Pendleton Army base.
I wandered around till I found a gas station. (So much for National Security).
I didn't have a petrol can, but a nice young solider in uniform helped me out with one.

I climbed back down the hill, through a different hole in the fence, juiced up the truck and made it to the Trestles car park. 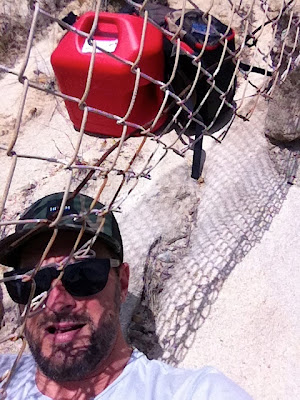