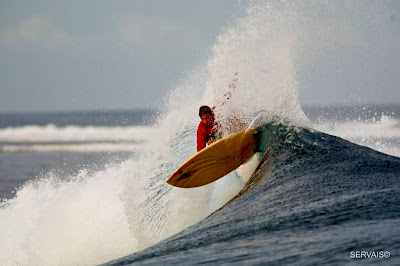 We just received this classic Tom Servais shot from the Mentawis of Sydney surfer Damion Fuller crankin’ a serious off-the-lip on a juiced-up bowly left. What’s so interesting about the shot is the age and shape of the board - It’s a SKY twin-fin I shaped here in Byron back in 1978. It has a powerful but manageable tail, similar to what Mark Richards popularised in the late seventies, delivering strong on-rail arcs. The mass of those boards was forward, being just before Geoff McCoy introduce the No-nose templates.

To achieve such a radical bank off-the-lip as Damion’s, the surfer has to commit heaps of strength and great timing, so that the LIP does the work of re-directing that chunky weighty nose around in the SNAP that’s happening in the next split second. Fortunately, Damion LOVES that old board, and is familiar enough with it to pull off such a committed manoeuvre.

As the board’s shaper, I’m proud to see that design pushed to it’s limits, and have it deliver. A very satisfying feeling for any shaper… especially one who’s been on the planer for almost 50 years now!