Dirty Wax is your freind. 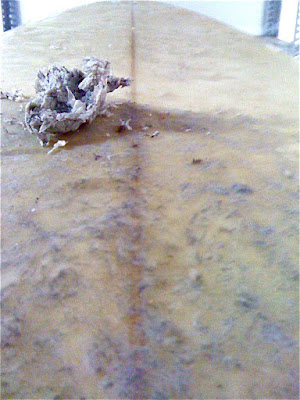 When I was 11 I went shopping for my first second hand fibreglass surfboard with my mum. We drove around to all the dusty, gritty surfboard factories in the back of Brookvale to look at the second hand boards that had been traded in on customs. My mum was not impressed, all the boards were dirty and covered in old wax.
I said "don't worry mum, the old wax comes off".
She said, 'well, obviously it doesn't.'
She refused to believe me, because if you could get wax off an old board there is no way people would tolerate leaving them like that. They just look so bad.
This has been my blessing and my curse since I started collecting old boards.
Really old, caked on wax can be hard to remove and I have tried many methods with different levels of success.

One of my first attempts was to put the board in the shower at home and turn on the hot water. This doesn't actually remove the wax, it just liquefies it long enough for it the spread all over both sides of the board, the walls and glass of the shower. By the time it hits the cooler metal drain it collects and solidifies, blocking the drain.
This takes much long to clean up, pretty much all weekend, than simply scrapping down the board.

Another method I don't suggest is the put it out in the sun to 'soften' then forget and go to the beach. Upon return I have found huge delam bubbles pushing up on the deck. Again the hot wax simply collects on the cooler underside on the now worthless board.

Acetone will remove wax quite effectively I have discovered. But after cutting through the wax it keeps going through the resin till you are left with patches of exposed fibreglass matting and another worthless board.

On a cold day, when its hard to push the plastic wax comb through the tough bumps of wax, don't turn to the use of a bread knife. It will cut through the wax, but its not until you give the board a final wipe down that you'll see how you've actually scratched the thing to death.

Ten mins in the sun, a nice new wax comb with a good straight edge and an old tee shirt with liberal amounts of mineral turpentine is the best method.

That orange peel smelling stuff is great, but I can only get one or two old boards per bottle out of it. Turps is cheap.

Be sure to collect all the wax shaving in a ball or on a piece of newspaper because if these get on your shoes they are harder to get out of the carpet than it is to clean the shower.

When taking photos to sell a board on ebay, a quick rub with kerosene on a rag will give a finish equal to 2 hours on the 1200 grit and a wool buffer.

For all trouble I've had with old wax I still love it. Because nothing gets the price down to $20 at a garage sale for a $500 vintage surfboard than saying 'yeah I don't know, I don't think I'll be able to get all that old wax off'.