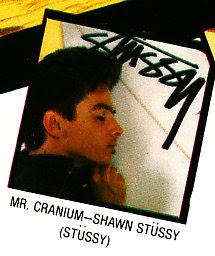 In Australia Shawn Stussy is generally considered to be the man who populated a plague of elastic waisted pants upon a generation. Few here believe he was once a credible shaper in his own right (like Bob Hurley who even shaped for Lighting Bolt). I heard when Shawn finally visited Australia and complained as to what had become of his good name the local licensee in Melbourne simply replied 'well...you never sent the cheques back'.
I have found here a rare portrait of him with one of his boards from an ad from a surf shop that carried his hardware and a shot of a young Californian ripper putting one of his boards to good use. I sure would like that twinny for my collection.