The Thruster (officially) proves itself. 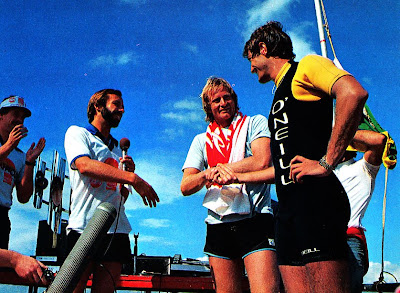 Simon Anderson collecting his 1981 2SM Surfabout Trophy, shaking hands with a defeated Shaun Thompson who has just lost on a twin fin to Simon's new thruster design in 2 foot surf at Narabeen. Simon had just won the Bells Easter Classic a week before in huge waves on the same design, thus cementing its place in surfboard design history as the most functional design ever.