My friend from San Clemente let me have a look at a couple of gems he had hidden away in his shed.
One highlight was this beautiful Californian built Terry Martin shaped red pigment coat Hobie Lightning Bolt stinger.
He had shown the board to a local guy who had a good look at the details of the board and said 'I've got something for you' and produced a copy of a hand written letter by Gerry Lopez in Hawaii to Mickey (Munoz) and Danny in California. This board could have been a direct result from this very piece of correspondence.
Amazing! 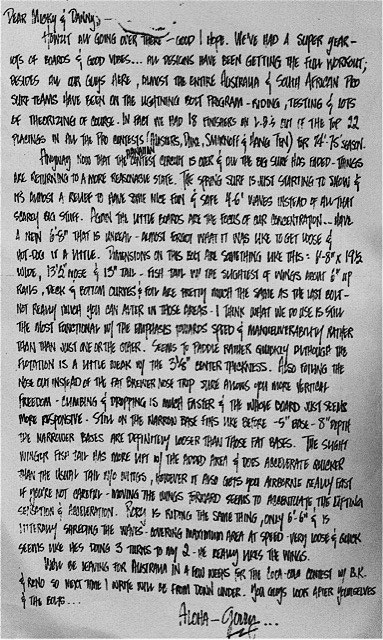 Dear Mickey and Danny,
Howzit all going over there (in California) - good I hope. We've had a super year- lots of boards and good vibes.....all designs have been getting the full workout: besides all our guys here, almost the entire Australian and South African Pro surf teams have been on the lightning Bolt program - riding, testing and lots of theorizing of course. In fact we had 18 finishers on L.B's out of the top 22 placings in all the pro contests (Masters, Duke, Smirnoff and Hang Ten) for the 74' 75' season.

Anyway now that the Hawaiian contest circuit is over and all the big surf has faded- things are returning to a more reasonable state. The spring surf is just starting to show and its almost a relief to have some nice fun and safe 4-6' waves instead of all that scary big stuff. Again the little boards are the focus of our concentration...have a new 6'8" that is unreal - almost forgot what it was like to get loose and hot dog it a little. Dimensions on the this bolt are something like this: 6'-8" x 19 1/2 wide, 13 1/2 nose and 13" tail - fish tail w/ the slightest of wings about 6" up rails, deck and bottom curves and foil are pretty much the same as the last bolt- not really much you can alter in those areas. I think what we do use is still the most functional w/ the emphasis towards speed and maneuverability rather than just one or the other. Seems to paddle rather quickly although the floatation is a little weak w/ the 3 1/8" centre thickness. Also foiling the nose out instead of the fat Brewer nose trip sure allows you more vertical freedom- climbing and dropping is much faster and the whole board just seems more responsive. Still on the narrow base fins like before - 5" base - 8" depth the narrower bases are definitely looser than those fat bases. The slight winger fish tail has more lift w/ the added area and does accelerate quicker than usual tail w/o wings, however it also gets you airborne really fast if your not careful- moving the wings forward seems to alleviate the lifting sensation and acceleration. Rory is riding the same thing, only 6'6" and is literally shredding the waves- covering maximum area at speed- very loose and quick, seems like he's doing 3 turns to my 2- he really likes the wings.

We'll be leaving for Australia in a few weeks for the coca-cola contest with B.K and Reno so next time I write will be from Down Under. You guys look after yourselves and the Bolts..... 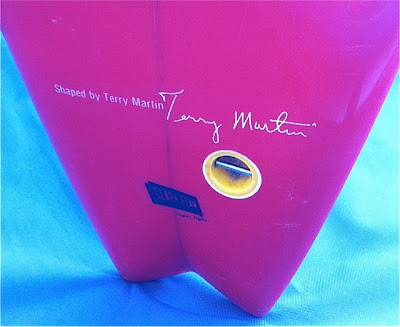 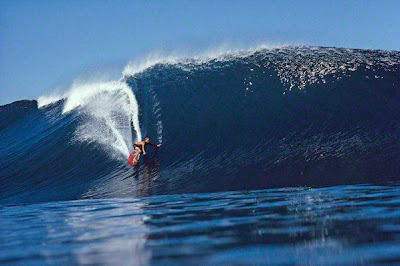 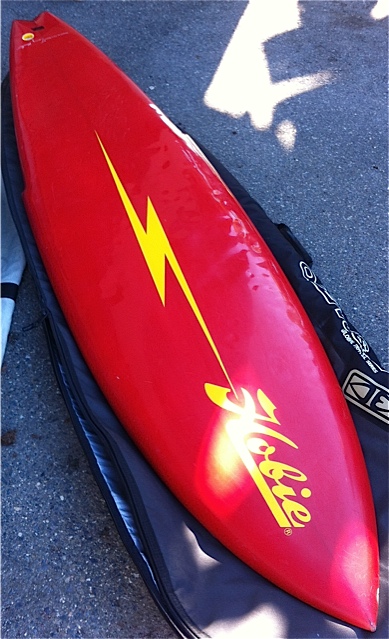 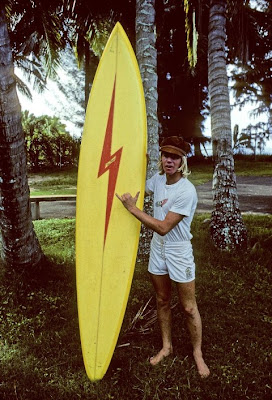 the letter and the board 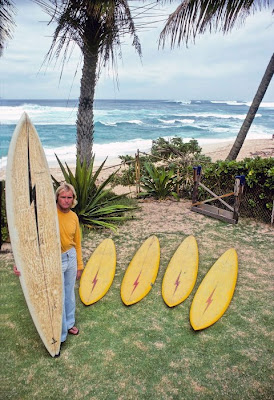 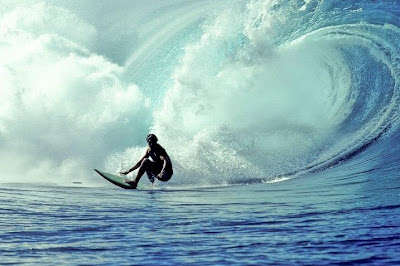