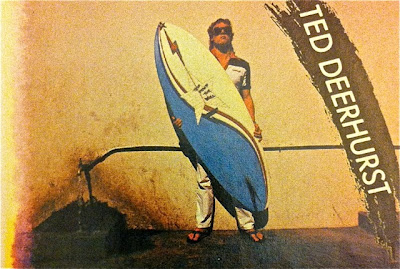 When I picked up the Ted Deerhurst Excalibur from East LA the owner told me that the Museum of British Surfing had been in contact about the board. Ted was an important figure in birth of the modern competitive British surf scene and was originally from an area not far from Braunton where the Museum of British Surfing is located.
I got in touch with Pete Robinson from the Museum and we decided that both the board and Ted's legacy would be best served if we could organize to retire the board to its spiritual home on England's surf coast. We agreed that if I could make a visit to the Museum as part of my UK surf adventure then I would donate the board to the museum to form part of its permanent collection and it could sit in the archives along side the museum's other board of Ted's, his Tom Parrish Lightning Bolt.
My ego kicked in and I thought, "hmmmm, what a good story for the blog, I bet I can get some good pics of me as the generous benefactor".
Little did pete know that although the board had a degree of provenance, its still a pretty crappy example of an unpopular 80's surfboard design. 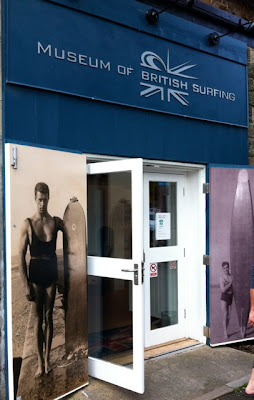 My brief visit was timed to co-inside with Alasdair's Vintage Surf Swap and Pete's surf film festival at the Croyde village hall.
Driving through the rolling green hills and pulling into the historic town felt like I was walking through the opening scene of a BBC period drama. 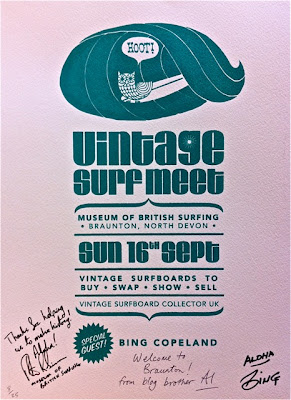 Pete kindly and generously let me make the donation as part of the intro to the surf film festival which gave me the honor of briefly sharing the stage with legendary Californian shaper Bing Copeland who was there to introduce the film 'Boardroom- Legends of surfboard shaping'.
The opportunity to get on stage and introduce myself allowed me to meet a dozen English fellow vintage surf enthusiasts in one hit.
The point of the trip, selfishly, was to get a one photo of me, on stage, handing over the board, for this blog, so I could share the tale.
Stupidly, in all the excitement and pints of lager I failed to ask anyone to take my picture!!

To me, this little 24 hour adventure exemplified exactly what it is that I love so much about doing this blog.
It gave me an incredible opportunity to meet some amazing like minded people (translate that to read equally mad) by giving me a reason to travel to a place where I had never been and was never likely to go and to participate in a series of events that, although not in the least bit interesting to most people, will stay with me for the rest of my life.
No money changed, but deep, idiosyncratic friendships were forged.
They say cyberspace isolates people and stifles human interaction.
I say that couldn't be further from the truth. 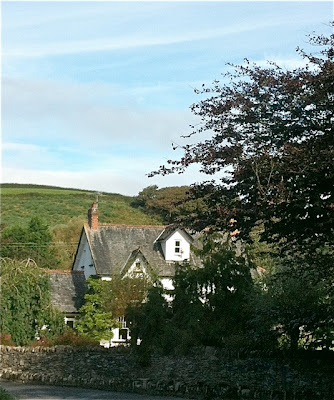 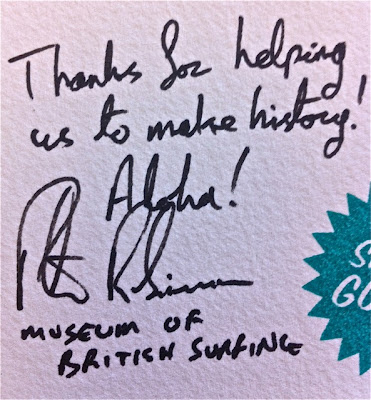