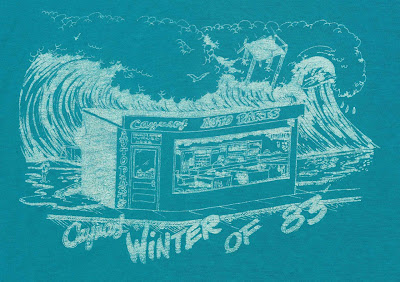 I've had this tee shirt for 10 years+ and I love it. It was a gift from Uncle Keith and I even brought it with me from Australia to California, back from whence it came. It commemorates the celebrated swell of 1983 that hit the Californian coast creating great waves and much havoc. I love the little guy surfing in the drawing and the collapsing pier and auto parts store.
I recently found an article on the above mentioned swell that I have reproduced below with pic of my beloved Swami's. I can tell its only a matter of weeks till I get like that again. 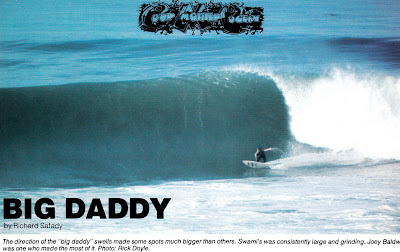 The winter of 1983 will be a season by which others, years from now will be compared. The yardstick that most people measure past winter surf by is 1969. lf you were fortunate to be surfing then, you may remember some major differences. Swell, and wind direction were the two most important factors. ln 1969, most of the cleaner swells arrived from the northwest. This year (1983), the southwest. The reason 1969 is so fondly recalled, is the amount of surf spots that are set up to handle a northwest movement. One of the most important elements affecting Southern California surf, is the direction from which the swell originates. Geographical position determines which areas will receive the correct angle and shape. Most of the Santa Barbara area, some of the Ventura Oxnard spots, and all of Palos Verdes turn on with a northwest push. This was the case in 1969 and the early 1970s. Fortunately, our southwest swells were large enough this winter to drive into all spots, no matter which direction they faced. Westerly set-up breaks like Topanga, Swami's and Big Rock, received heaps of attention. Had most of this past winter, January through March, been under normal, medium sized conditions, swells from the southwest would not have had a favorable season for spots that need a bit of size to produce. La Jolla Cove, Lunada Bay, Redondo Breakwater, Ventura Overhead and El Capitan are some examples, Wind direction, while favorable for most of our Iarge winter swells of the past, was very much a changeable factor this year. The new year awoke, yawned and seemed at ease during the week of Jan 8th, as the southland enjoyed 80 degree, Santa Ana type conditions. Some weak two to four ft. trimmers offered a cool-off , but in no way
were any of us prepared for such a drastic change that was to follow. Up until the second week of January, our climate had been cruising, and then, with our guard down, it just exploded. ln the final two weeks, five major low pressure storms rammed into California. This action continued through March 5th before subsiding.
It would pick up again in an off-and-on pattern, but not with the same velocity. The typical behavior had a domino effect, with one mid-Pacific storm following another. Satellite weather photos proved the present and predicted the future. Nothing was to be spared in its path, pity the homeless and unprotected, advance and attack. You name it, the West Coast got it. No mercy.
With a combination of king tides up to seven ft., gusty southerly winds, (westerly in March), a full moon, high waves and rain, the beast attacked the coast. lt continued to ravage it until its appetite was appeased. Finally, in mid- March, apparently satisfied there was nothing left to prove, it lurked off to hibernate until next winter. After 2/z
months, the drying out and rebuilding period began. Evaluating the damage, the box score favored mother nature.

Beachfront damage of over 3,600 homes and around 750 businesses, State Parks, recreation facilities, parking lots, lifeguard headquarters and towers, were rn need of much repair. Sand erosion, due to the sea engulfing the beaches, spilled onto the boardwalks (strand), and in some cases the street. PCH through Huntington was closed for nearly a month, because storms had pushed sand onto the roadway. Each year, winter storms take away sand, and summer's wave action brings it back. With sand costing $7.70 a cubic yard, trying to replace the vast amounts eroded by the storm, would not be possible. Fortunately, summer is not far off, and maybe June will signal the beginning of our coast to widen out again.

Piers: ln the South Bay, the concrete supported piers in Hermosa and Manhattan survived, along with the Redondo horseshoe pier, which has a deep water defense. But when support pilings weakened and gave way, extensive damage was the tally at Pt. Arena, Santa Barbara, Santa Monica, Venice, Palos Verdes, Seal Beach, Balboa, Huntington, Newport, San Clemente, and Ocean Beach. These long standing landmarks were among those hardest hit. Oil drilling platforms and derricks were not spared. Breakwaters: High combers also punched gaps in the breakwaters at Redondo and San Pedro, near Cabrillo Beach causing $4.5 million in damage.

These rock walls were built to protect boating and shipping. With boats sinking or being damaged inside these exposed harbors, and others in Santa Barbara and Ventura closed because of sand built up around the entrance, priority aid was requested. Only two or three miles of the once heavily traveled 19 mile beach bike path in the South Bay, was left intact. Portions of the rebuilt pathway will have to be relocated further from the shoreline. Sea life: Even permanent guests of the ocean were forced to evacuate, as more than 130 seals and other sea mammals were deposited on the beaches.
Fortunately, a large percentage of whales had already migrated into protected waters south, avoiding a
possible detour. From Eureka to Baja, rain was responsible for flash flood alerts. Coastal flooding due to runoff water from canyons and broken drainage systems would undercut pavement, causing roads to sink or wash out.
Just when you think nature has reached its limit, you find out just how stubborn these storms can be. Enough was not enough. Way above normal precipitation, 23" to date, compared to 8.56" last season, caused hill sliding and evacuation and overflowing of some dams and reservoirs. Touching all bases, the storm caused a temporary loss of electrical power in many areas
and let you know who the boss was, by sending a tornado to sweep through three miles of South Central Los Angeles.
Rain, floods and surf damage from the worst series of storms in nearly 20 years caused $523.6 million in property
damage to California from January 21 st until March 11. About 500 homes were completely lost, out of 8,382 damaged.
Financial losses to agriculture have been $21 3.8 million, with thousands of acres underwater. lt's no wonder, sections from Los Angeles to San Diego were considered disaster areas. lf there is an explanation for all of this, Douglas lnman, Director of Scripps institute Center for Coastal Studies tries to.
He noted that the globe has experienced weather patterns of a stable or calm period, from the late 1940s to the late 1970s. He and his colleagues have passed warnings on to government off icials, developers, and property owners, that since 1976 the 'stable' period is over. "The coast is in trouble, it's just a matter of time." ln some areas of the coastline that had taken up to 30 years to reinforce, the storm had the nerve to wash it away in one day. Every once in a while, something or someone will happen along, and have such an impact that any past or present