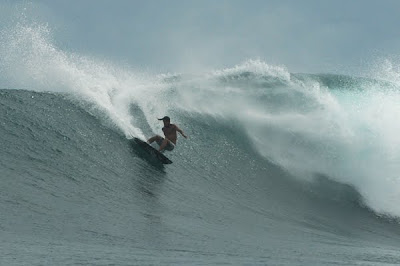 An enabler is a person who by their actions make it easier for an addict to continue their self-destructive or obsessive behavior. Many of you know I have an obsession with Lighting Bolt twin fins and continue to fan the flames of my passion by sending me pics of your Bolt twins. To date I have received pics from enablers in the US, Australia, Indonesia, NZ, Israel, France and England.

Geraint sent me these pics and message from the UK.
I'm a board collector from England who follows your blog along with the UK board collector. I am so jealous of your collection it is absolutely amazing. I've been trying to find out about a lightning bolt Twin fin i own. It was the first board i acquired for the bargain price of a 4 pack of beers. It didn't have any fins and i bodged the repairs to get it watertight. There is a signature on the deck in front of the bridge which looks like BP. I was hoping you might be able to shed some light on it. I also would value your opinion of the swallow tail profile. I have rebuilt the tail rounded off but i am unsure if this is correct or if it would better suit pointed ends? I have just started sending photo's of my boards to the UK board collector site, i have a hand shaped Terry Fitsgerald Cheyne Horan board that you would probably be interested in. Keep up all the great work. I look forward to hearing from you.
Many thanks. 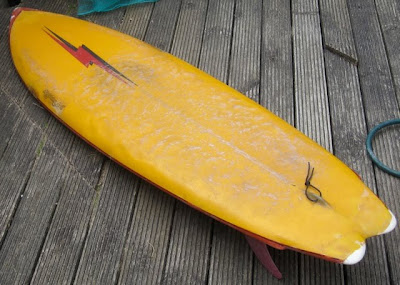 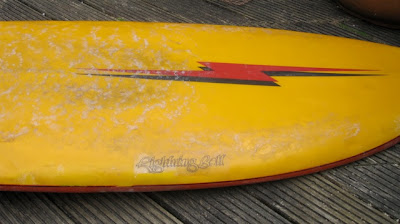 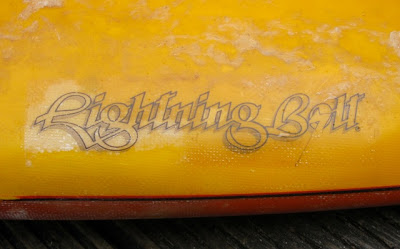 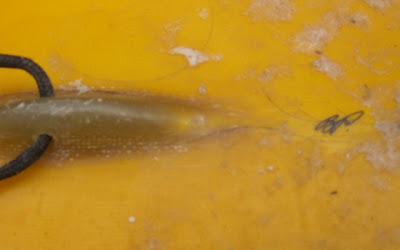 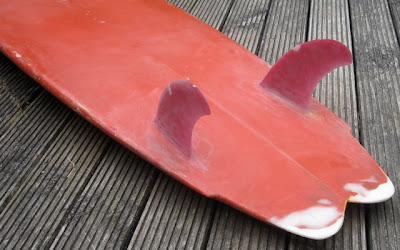 The magical thing about Lightning bolt surfboards is that they didn't all come from one specific factory. The label operated somewhat as a loose co-op. Some are official Shipley, Lopez endorsed and authenticated and others, often just as interesting and beautiful.

Randy Rarick wrote to me from Hawaii a while ago with this helpful message-
Just a heads up on the Lightning Bolts. They were licensed out to a variety of individuals, with "Pure Source Certified" licensees making them in California, South Africa, Australia and Brazil. Danny Brawner, who worked for Hobie, who had the license for the USA mainland. It is very rare to find an actual Gerry Lopez shaped one, and even in Hawaii, there were others shaping them under the authorization of Gerry and Jack Shipley who owned the Bolt label in the early formative days. During it's hey day of the mid to later 70's, over 30 different shapers pumped out Bolts: "The Most Frequently Tubed Surfboards in the World".

In Hawaii they had three distinct categories at one stage, known as "Units", with the "name" surfer/shapers at the top category, the reliable shapers in the next category and the up-and-coming or journeymen shapers in the third category. Unit 1: Gerry Lopez, Reno Abellira, Barry Kanaiaupuni, Tom Parrish, Jeff Hakman, Owl Chapman, Don Koplein Price: $190. Unit 2: Rory Russel, Brian Hamilton, Tom Eberly, Peter Trombly, Wayne Santos, Robbie Burns, Cowan Chang, Bill Barnfield, Mark Angel Price: $175 Unit 3: Steve Walden, Russel Kim, Tom Nellis, Brian Hinde, Joe Blair, Bill Stonebraker, Tony Anjo, John Carper, Price $160
So, there are a lot of Bolts floating around out there and while everyone claims it is a "real" Gerry Lopez, only those in the know, really know!

So with the initals BP it was probably made in Europe, Brazil, Australia or SA. 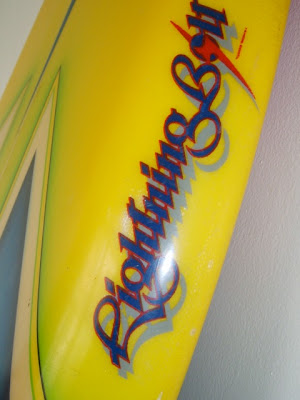 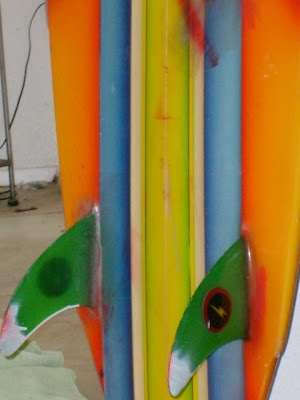 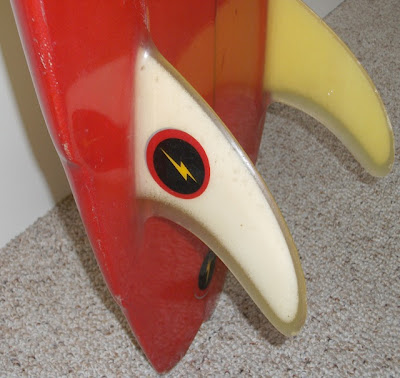 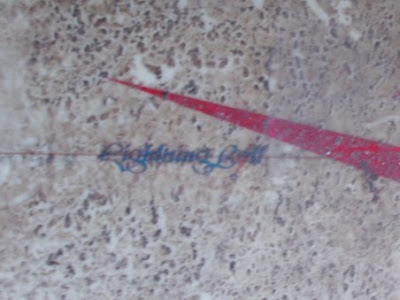 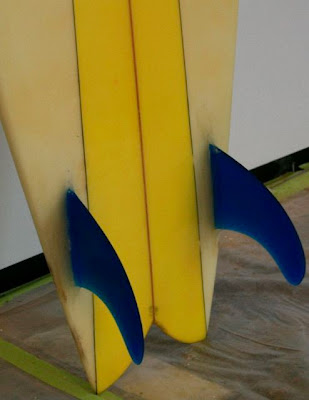