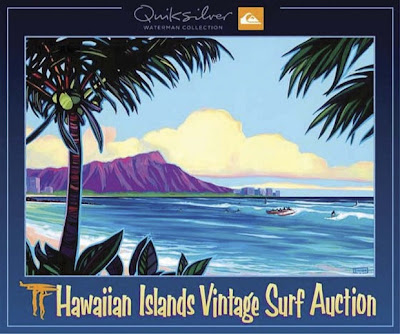 Bidders from around the world are lining up for an event which may be an epic assortment of Hawaiian surf collectibles, July 23 at the Blaisdell Center in Honolulu.
Pre-registration has opened for the Hawaiian Islands Vintage Surf Auction, presented by Quiksilver Waterman Collection.
Since its inception in 2001, the aution has been held every other year and has seen more than $2.6 million worth of surf collectibles change hands, states a Surfers Village release.
Randy Rarick, the auction curator, expects bidding at this year’s event to hit a fever pitch with the world’s top collectors already on board.
Bidding will be limited to 250 attending bidders, but online bids will be accepted in conjunction with the live webcast of the event.
“We have collectors coming from Japan, France, Brazil, Portugal, the United States and a huge contingent from Australia, this year,” Rarick said. “Australians are serious about their surfing and know its history. In fact, they played a big part in revolutionary surfboard designs and will be highlighted in this year’s collection. With their dollar so strong right now and their natural affinity for all things Hawai‘i, they’re going to be in it to win.”
Rarick has started unfurling his “Peek of the Week” teasers and said he will roll out generations of highly coveted auction items over the course of the coming weeks.
“This auction will cover the gamut of surfboards,” Rarick said. “From the early plank and laminated wood boards to Tom Blake paddleboards, Hawaiian big wave ‘elephant guns,’ and early day pro rider boards including those of Shaun Tomson and Larry Bertlemann.
“We’ve even got Gerry Lopez’s board from the movie Big Wednesday, along with other artifacts from the movie like George Greenough’s water camera which shot the sequence of Gerry riding that board.”
Rarick is holding onto a handful of spaces for last-minute key items he believes will make the cut into the ultimate 100 auction lots.
The lineup of items will be set and unveiled on June 22. Leading up to the unveiling, the “Peek of the Week” will feature a new item on Facebook.
Surfboards are always the top draw, including some from over years including $40,000 for a 1949/50 11’0” Bob Simmons foam sandwich board, $39.000 for a 1955 10’4” Matt Kivlin balsa board, $33,000 for a 1960s 11’0” Buzzy Trent model Surfboards Hawai‘i by Dick Brewer, $25,000 for an 8’0” Lightning Bolt shaped by Gerry Lopez, $20,000 for a 13’8” wooden Tom Blake Rogers paddleboard.
A portion of all auction sales will go to the Outrigger Duke Kahanamoku Foundation Scholarship Fund and to the Surfing Heritage Foundation.
For those unable to attend in person, the auction will be broadcast live on the internet with internet bidding in real time.
Viewing starts from noon to 6 p.m., July 22 at Galleria Hall with free Antiques Roadshow-style appraisals for the public.
Viewing is also available July 23 from 10 a.m. A silent auction will take place from noon to 3 p.m. with the Main Auction taking place from 4 to 7 p.m. at the Pikake Room.
Viewing is free, but bidders must purchase a bidding number.
Visit www.hawaiiansurfauction.com for more information.