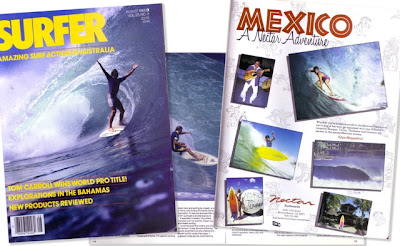 Philipe wrote to say:-
I shot the Nectar ad, in 1984!  (the non action shots)
The rainbow spray board was mine!
I bought it in San Diego in 1984 and the girl holding it by the Tropic of Cancer line (the white sphere) is my wife!
The lower right picture in the ad (rainbow thruster in front of a hut) was shot in mainland Mexico, in the fabled Matachen Bay (aka San Blas or Roca Bruja, Witches Rock).
The photos were taken on the first long surf trip I took with my soon-to-be-wife, after doing several shorter ones to Baja.
We went on a trip to the tip of Baja, by ferry to Mainland and to the incredible "ferrocarril de Chihuaha a Los Mochis" that crosses the Sierras and La Barranca del Cobre. We went hiking in Tarahumara country, back across to the Pacific and down to San Blas to surf. The photo was taken in San Blas where my friend Dana Fisher (aka "High Voltage" the Surfer Magazine photographer, who wrote the defining Nias story, after Erik Aeder's discovery) told me about "the longest wave in the world as featured in the Guiness Book of Records".
It's actually a long, mellow right point break, that was so perfect for me!
You can read the whole story here. 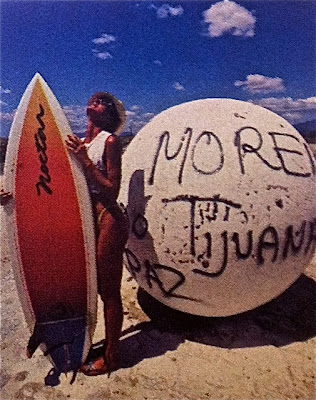