Songs From The Ether 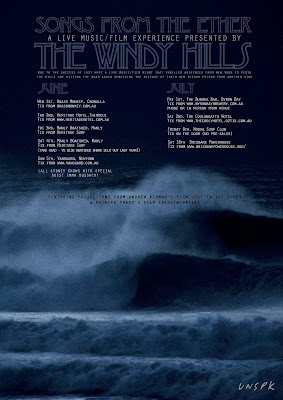 Songs From The Ether is a live music and surf film experience curated by Andrew Kidman. It features live music from his band The Windy Hills teamed with projections from his latest film ‘Lost In The Ether’ and the new film from Patrick Trefz’z: ‘Idiosyncrasies’.

Following on from the success of Last Hope in the live format – the production travelling across the world and drawing large crowds at the Powerhouse in Brisbane, The Perth International Arts Festival and New York’s Surf Fim Festival - Kidman and his band The Windy Hills have reconvened to create a similar experience for his new film.

The Windy Hills (featuring Kidman, Joe Jones, Paul Brewer and Jay Kruegner) formed originally as The Brown Birds From Windy Hills, with soundtracking these films in a live setting their uniting passion. Following a string of Kidman’s solo albums, the band’s first record Three Sails To The Wind was released in 2007 before Kidman’s recent filmic project the Last Hope took flight. In January of this year they released the album Friend From Another Star (the single “She was a girl” could be a flipside to Lou Reed’s Walk on the Wild Side said the Sydney Morning Herald). And “Friend From Another Star will no doubt win scores of friends in 2011 with its eerie, yet euphoric sound that’s bound to stand up to repeat listens. In a nutter, this is spinifex surf music at its optimum and most pure level played out by a band who knows how to get into the zone, ‘Road Block’ being arguably one of the first grand Oz tracks of the new decade” - Nick Argyriou, Rhythms Magazine

Kidman’s own home, nestled on a rural property on the North Coast of NSW, would provide a backdrop for the conception of their second album. Recorded in a small studio in nearby Mullumbimby, Friend from Another Star is more muscular & varied – some songs wilder, some cleaner, some soft with acoustics and warm with Americana. While not directly inspired by the ocean, it possesses a similar fluidity and escapist quality that echo the band’s shared passion and connection with the sea.

Call it a surf night, a music improv night… call it what you will, Songs From The Ether shows the ocean and surfing in a mesmerising light, with live soundscapes and visuals to disappear to. Kidman & band will tour the production across Australia’s east coast this June & July. 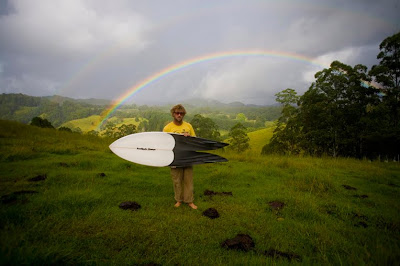