MR twin fin gun in my favourite TV ad of all time.

He rides the waves of the world
He's the king of the curl.
An Aussie with the will to win, four times world cham-pi-in.
How do ya feel...
With a proud Novocastrian grin, the first champ to use the twin fin.
They thought it was weird at the time, he left them all behind
How do ya feel...
Banzi Pipline Ha-wa-ii, he took the masters easily
How do ya fe-ee-eel 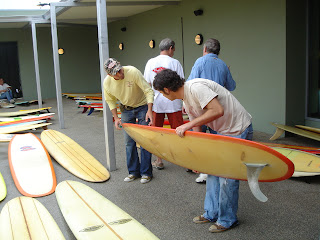 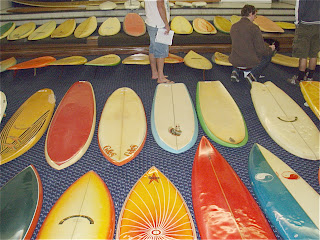 MR hand shaped this one off, twin fin gun, for the use in the commercial at Pipe and Haleiwa.


It came up for sale at Mick Mock's auction at the Mona Vale Hotel in 2004. I was there at the auction, poised, ready for action. As the board was coming up for auction my phone rang. My best friend had just broken up with his girlfriend and he needed to see me. I left the auction and met my mate in the beer garden and he poured out his heart over schooner of Toohey's New and I did what I needed to do, listen, console, comfort and reassure him him that it would be OK and that they would get back together, which happily, they did.
I missed the auction. The MR sold for $465 from memory, less than the roll ofbills rolled up in my sweaty pocket. My friend was united with his one true love, I sadly, was not.

I have recently learned that the board went to a good home and is currently being well looked after by Dan.


Out takes from the commercial, showing more of the unique board.

The rest of the series of more than 20 ads that ran from the late seventies till the early 2000's could make up the core curriculum for a degree in the history of Australian sports culture.