Cheyne Horan tells the story of the Lazor Zap.

Surfabout was a surfing competition held annually in Sydney, Australia between 1974 and 1991. It was sponsored by Coca Cola and radio station 2SM and hence was called the Coke/2SM Surfabout. The contest was run in late Autumn, after the Bells Beach Classic at Easter.
The contest was taken to Channel 9 in 1978 by 2SM Program Director Barry Chapman who convinced then Director of Sport David Hill that Surfabout would make great television. Surfabout had a waiting period and was mobile so it could go to the best waves on Sydney's northern beaches.
It also pioneered the man on man format and this added further excitement for spectators and television viewers.
In 1979, down to the round of 16, Sydney went completely flat and showed no signs of improving. With the contest and television program series at risk, Surfabout showed just how mobile a "mobile" contest can be when Chapman and Hill, after discussion with Contest Director Holmes, took the decision a great cost to the sponsors to fly the final 16 contestants, contest officials and television crew 600 miles to big cold waves at Bells Beach for the remaining rounds. Six light aircraft flew over Bells Beach to find a beautiful 8 ft swell lined up off Point Rincon.


Cheyne wrote to say "In the 1979 2SM Coca Cola Surfabout the surf was very small for the first round and with a 10 day waiting period the surf was almost flat every day and the contest was on hold for 8 days, with only 2 days left in the waiting period and no surf on the horizon Contest director Paul Holmes came up with a major coup. Bells was meant to be 8-10 ft the next day so Paul organized to have the whole contest air lifted from Sydney to Bells.
This was unheard of to air lift a whole event chasing the best waves in Australia, so we all flew down to Geelong in very small 10-12 seater planes, about six planes in all.
The best surfers in the world were met by these big super comfortable buses at this country airport that looked more like a cow field. I remember when we came over the Bells hill and saw the surf for the first time everyone on the bus started screaming and hooting, it was very big as we had just came from flat Narrabeen. My first quarter final was with MR who had just won the Bells contest 2 weeks before and was the favorite to win this event now that it had been moved.
Rip Curl had made me a special wetsuit that went along with the board white, red and yellow, wearing it just made me rise to the occasion, we paddled out and my board went the best ever and surfing super tight and radical with MR doing his patented bottom turn snap, it was a very  close heat, I was able to get a tube ride with open face moves, commentators were calling it 'poetry in motion', when they announced the winner we were both together in the bus and I just couldn’t hold back the excitement and just screamed out with joy.
Next heat was with Simon Anderson, a Bells specialist, who was the favorite to win at Narrabeen and was on fire, the board was like silk, fitting like a glove and feeling like a formula 1 racing car totally tuned. I progressed through this heat and the light was bad and they decided to call it off for the day.
Next day, same thing, the surf was perfect 8-10ft.  Larry Blair was last years winner and was  going for two in a row. He paddled out in a vest...surfed great but froze, it was amazing because Larry wasn’t known for his back side surfing and had he made his backside tube he may well have won two in a row, as history now shows who the winner of the first ever airlifted surf event is.
I consider this one of my best ever victories.
Geoff McCoy and I were working on trying to stay in one place on the board so there was no lag time between turns also getting the board way over on the rail to get extreme angles on the wave. The design of the spray came from Vic Ford who just after coming back from Hawaii drew it, later I saw James Jones of Hawaii’s surfboards I could see where he got his inspiration. I colored the board yellow rails with red-maroon deck I used these colors and design from the time I was 15 till 19 and would still like to have this design today.
- Aloha Cheyne" 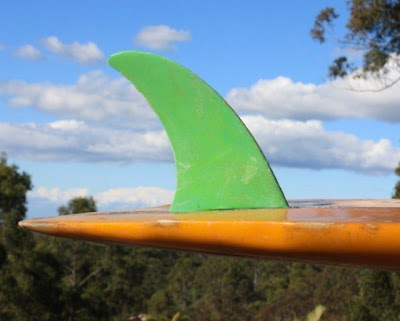 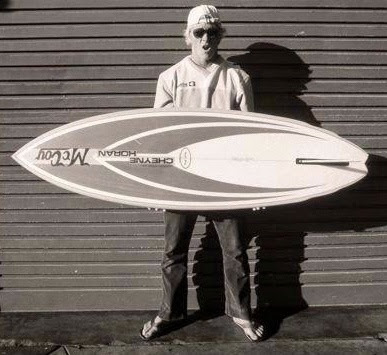 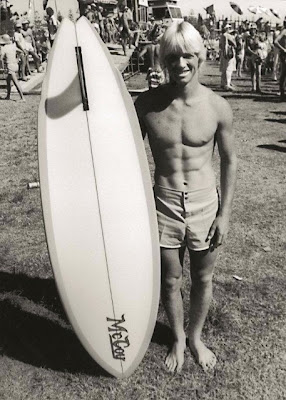 "In the next chapter we will explore is the first of the needle nose Lazor Zaps.
I have one of the originals.

Ive written stories on 4 boards to share.
The Waimea 5'8,  the World Title board, the one you have and the outside log cabins
board from one of the biggest days ever..
I still have to write the needle nose story from scratch."
Aloha- Cheyne

Many thanks to Laurie and Cheyne.
All photos from the collection of Cheyne Horan.