Alisdair from "Vintage Surfboard Collector UK" has shared pics of one of his Vitamin Sea Cheyne Horan model triple flyer single fins.
He writes "This is the second Cheyne Hornan model Chris Jones made for Vitamin Sea in Newquay, around 1981. It was modelled from the board Cheyne surfed at Fistral beach,Newquay in the 1981 in the Gul Alder pro am.
The results were, Cheyne and Rabbit equal 1st after the waves died on the last day !
Vitamin Sea made around 30 - 40 Horan models and the sprays got more elaborate as the series went on. A lot of them were twin fins but there were some wide tailed single fin zap inspired models made. 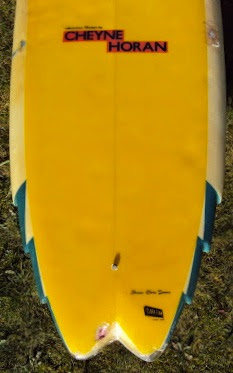