Revealed: the long and short of surfing history.

A new documentary explores the feud over the shortboard's invention, writes Sacha Molitorisz of the Sydney Morning Herald 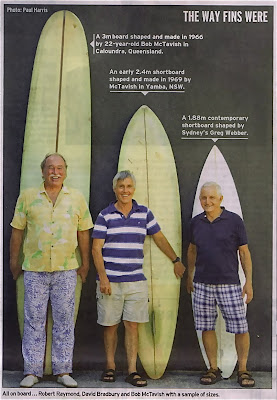 AT AGE 19, four years before he reshaped the sport of surfing with a handsaw, Bob McTavish had the darkest night of his life.

It was 1963. On his quest to find the perfect wave and shape the perfect board, McTavish surfed all day and slept in cars. The young drifter had no shoes and no wallet, just a board, a pair of shorts and a vague dream of surfing in Hawaii. Unfortunately, he had no cash for lunch, let alone international travel.

McTavish, however, was never bothered by obstacles or constraints. On a perfect early summer's afternoon, he was at Darling Harbour farewelling surfer mates bound for Oahu, when he seized the chance to stow away on the P&O liner Orsova.

The plan worked. After arriving in Honolulu 10 days later, McTavish surfed the monster swells of Sunset Beach for five blissful weeks until, two days before Christmas, he was arrested and thrown into jail.

"That was a real season of reckoning," McTavish recalls. "I'd made the choice to be a surfer, but there I was 6000 miles from home. It was a couple of days before Christmas, and I was thinking, 'Where are my mum and dad and my brothers and sisters? I've chosen this career to be a surfer, but have I done the right thing? Should I have stayed at school and knuckled down?"'

Luckily, his doubts washed away during his first session back in the Australian surf.

A new documentary Going Vertical: The Shortboard Revolution reveals that he went on to become perhaps the most important innovator in modern surfing.

In 1967 McTavish teamed up with George Greenough to develop the "Plastic Machine", an unusual beast with a V-shaped bottom that was short and fast. It proved to be the opening shot of the shortboard revolution, in which long, unresponsive planks gave way to modern surfing's abrupt turns and sharp cutbacks.

Well, so McTavish and his supporters contend. The Hawaiian Dick Brewer - a surfer and shaper with an equally formidable reputation - has other ideas. "The media made it perceived that the Aussies invented this whole thing," says Brewer in Going Vertical. "They didn't. It was basically a Brewer, Hawaii thing."

Since 1967 claims and counter-claims have swirled like white water. As well as interviewing McTavish and Brewer, who have been estranged rivals, Going Vertical quizzes their contemporaries in Hawaii and California and excavates archival material.

It features the testimony of revered Hawaiian Gerry Lopez, who watched McTavish riding a cut-down board during the 1967 Duke Kahanamoku invitational at Sunset Beach. "Everyone drew their breath at that moment. He drew a line on that board that no one still standing on a surfboard had ever drawn before ... That was the future of surfing," he says.

For McTavish, 65, still hooked on the buzz of a big swell, it's a vindication. "The shortboard was an Aussie invention," he says.

"I took the first shorter eight-foot boards to the Bells Beach Easter Classic in 1967. By the end of 1967 we Aussies en masse had fully ditched the longboard and all its trappings ... . That's at least six months before Brewer started cutting boards down.

"I saw Brewer cut his first one down in December '67. I urged him to cut it down. It was Gerry Lopez's own board, and he freaked. But it proved to be the board that kick-started the revolution in Hawaii."

These days, McTavish is a husband of 38 years and a father of five. At Byron Bay he runs McTavish Surfboards, where his son Ben is head shaper. He describes himself as a part-time surfer.

The film's producer, Robert Raymond, is also a keen surfer who lives in northern NSW. The director, David Bradbury, lives in the Byron Bay region and has a bodysurfer's respect for the swell. "It's [surfing] something that stretches them physically and, dare I say it, spiritually. It's about the way nature is much more powerful and can chew us up and spit us out."

Bob McTavish and Dick Brewer will attend the premiere of Going Vertical at George Street cinemas on Wednesday.