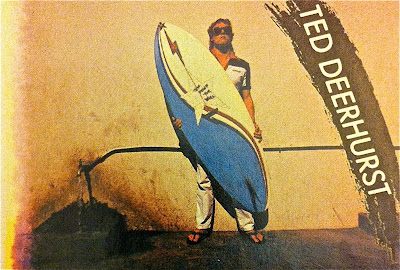 Jimmy wrote to say "I spotted this classic example of a Ted deerhurst twin fin the other day at Cronulla beach and asked the kid carrying it if I could get a photo.
That's him sheepishly hiding behind it as his mates looked on wondering why someone would be interested in Johnny's crap twin fin and not their Barney Rubble thruster.
But as the kid walked away feeling better about his ride his mate looked at the board in a different light.
The TD decal was huge and the real kicker was the great Pipedreams sticker between the fins with the classic Bugs image going for a 360' at Off the Wall, god I wish I had one of them for the back window.
I surfed against Ted once in a Mr Juicy contest at Port Kembala beach in the early 80s, it was a 6 man heat I came 4 th Ted 5 th, nothing to write home  about, but most contests aren't. Richo won, Jim banks second. Occy came third, he was so pissed. Then his mom came and picked him up drove him home in her Celica.