I've been writing this blog for close to five years and I've been obsessed with Lightning Bolt twin fins for a lot longer than that.
In that time I've never, never seen this many Bolt twins apear on the scene at any one time.
Five in the last fortnight!!

This lovely little Rory Russell model is terrorizing me at the moment and threatening to ruin my family's Xmas when I'm forced tell them that there is no food for Xmas dinner cause Daddy bought another surfboard. 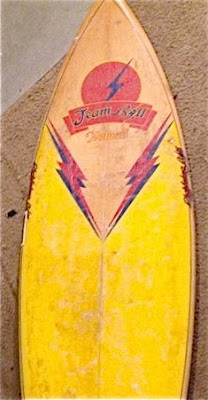 This Team Bolt is the only one I've ever seen become available for sale with the classic Rory spray.
It went off on eBay with zero bids and would have cleaned up very nicely. 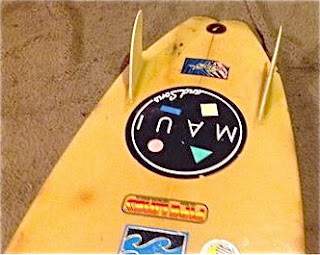 Like some kind of torture, another Rory Russell Lightning Bolt twin fin has just popped up to further  torment me. 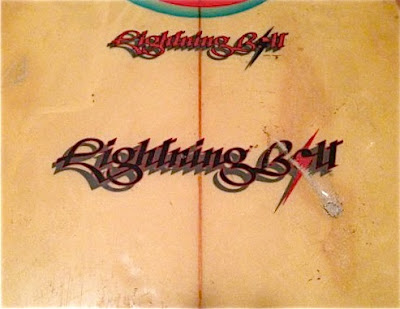 But the worst case of all was this little board collectors nightmare.
6'1, my ideal length, and painted all over with green house paint and black spray paint (as have been all my best finds). They left just enough of the original logo showing through and the fins, flyers and swallow tail, to let me know that this is almost definatatley another Rory Russell model.
Note the centre position of the black leg rope plug.
You just know that if I would have been able to get the chance to clean it up it would have been better than the board in the first pic. Or more likely it could have been snapped, dinged and trashed.
But it dosent matter, because it sold before I could get to it for $50.

At the same time this quirky little number has appeared.
Not really my cup of tea but damn I love that Team Bolt Japan logo. 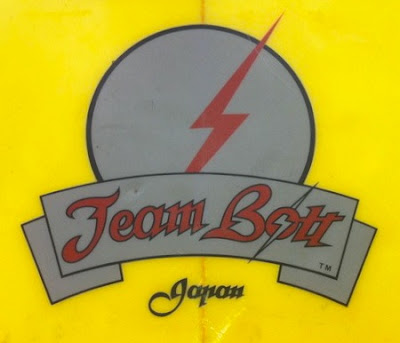 In the middle of this malstrom I met Bobby from Texas, who has got the Bolt bug as bad as I do. 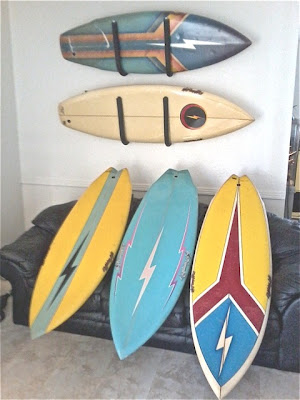