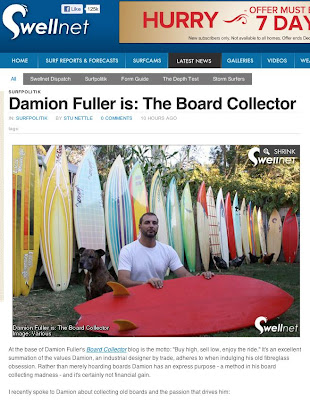 This interview by Stu Nettle originally appeared on Swellnet.

At the base of Damion Fuller's Board Collector blog is the motto: "Buy high, sell low, enjoy the ride." It's an excellent summation of the values Damion, an industrial designer by trade, adheres to when indulging his old fibreglass obsession. Rather than merely hoarding boards Damion has an express purpose - a method in his board collecting madness - and it's certainly not financial gain.

I recently spoke to Damion about collecting old boards and the passion that drives him:
Swellnet: How many boards do you have?

Damion Fuller: The number of boards I have is not important to me, I'm not about collecting for collecting sake. I like learning about design, functionality and history and there is no limit to what I want to learn. But for reference I have 120 boards that I've photographed and written about. I have another 10 or so in the US waiting to get cleaned up and test ridden and a similar number in Oz stashed under houses, in the rafters of garages and on 'permanent loan' to a few mates.
You only collect boards from 1975 to 1985, why's that?

I'm fascinated by the chapter of surfboard design history referred to as the innovation period or T2. If the first transition period was when surfboards went from 10 feet to 6 feet in length then T2, the second transition period was when boards went from single fins to twins to three fins and beyond.
The height of the innovation period was 1978 to 1982. Mark Richards was shaping and developing the modern twin fin, Cheyne Horan and Geoff McCoy were working on the no nose Lazor Zap that led to Simon Anderson refining the idea of the thruster. At the same time Col Smith and Al Byrne were working channel bottom designs that have led to the single to double concaves we ride today.
In addition to the wide variety of experimental hydrodynamic designs the boards of this era were still being comparatively heavily glassed, meaning many of the boards from this era remain ridable in their original condition today. Lastly this period was also a heyday for the now lost art of the airbrush. The majority of the boards of the period carry luscious sprays, unique pieces of art worthy of a gallery hanging in their own right.
Reading your blog you elevate surfboard design to something beyond mere utility, do you have a particular ethos or view of the surfboard as an object?
My philosophy is surfboards of this period are truly a form of applied art. I surf and I studied industrial design so I'm very aware of the technical design and functionality of the board but I'm also attracted to their aesthetics. The early 80's was still pre-shaping machines so these boards are one part unique hand made sculptures, one part experiment in hydrodynamic design, and one part new wave painting. Most importantly, I collect the boards to ride, I'm most interested to see how they perform in the water.
There are a number of ideas that were laughed at the time or simply went out of fashion that are still viable today. Two examples I can think of are the 5'8" single fin Geoff McCoy shaped Cheyne Horan to ride at Waimea bay. A lot of thought went into the lines of that board but the attempt to ride a short board in big waves was ridiculed at the time. The evolution of super short tow-in surfboards has taught us they were on to something.
Another example is Bob Hurley's re-release of the twin fin design he developed with Rabbit Bartholomew in 1983. An exact replica of this model is one of hottest selling models in the US today. Josh Kerr's Bali single by Rusty is identical to a 1980 Peter Schroff shaped single fin I have. I could go on... 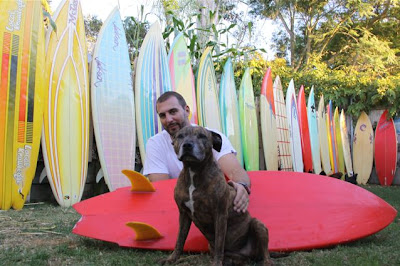 How do you feel about bog standard board collectors, people who collect without any purpose other than material acquisition?
I really like collectors who a have a very specific passion. Through my blog I've met a collector in Sydney who only collects shapers from North Narrabeen, a collector in Texas who only collects Lightning Bolt twin fins, a collector in Laguna who only likes Dick Brewer guns, a collector from the big island of Hawaii who is obsessed with the work of the Campbell brothers and their Bonzer design. What I don't like are hoarders who don't share their collections, keep them locked away and don't ride the boards.
I have formed some good friendships with my fellow collector and bloggers: Alasdair in the UK; Stephanie in France; Chris and Mark in California. They are all linked to on my blog. Other good friend collectors I have met include North Coast Gav, Marty H and uncle Keith.
The good news is I'm more interested in the history of a board and its design than I am in a mint condition board that has never been ridden and I can still find sunburned and slightly beat up boards from the late 70's and 80's under $100. Unfortunately the growth in the interest in collecting vintage surfboards has pushed the average price of a nice condition 30 to 40 year old board over $1000 and well outside my reach.
And how do you feel about retro remakes?
The funny thing about retro remakes is if you're willing to make the effort you can find an original example of the same design for around the same price or cheaper, so there's no point in it for me. But I'm pleased that original shapers are getting paid for their groundbreaking work a second time, and in some instances for the first time.
Reckon you could be considered a historian of sorts?
I am honoured to have been able to work as an expert appraiser by Scott Bass who does the Sacred Craft and Boardroom surfboard shows in California and by Randy Rarick who does the Vintage Hawaiian Island Surf Auction in Honolulu. I do know a lot about a small part of surf history so I guess that qualifies me as a historian or expert in the field of late 70's early 80's surfboard design. They even had me on Antiques Roadshow one time.
Who's your favourite shaper and why?
It's very difficult to choose an all time favourite shaper but it's hard to go past the ultimate poet warrior, the supremely talented and humble, Mark Richards. Trained under Dick Brewer in Hawaii he not only designed and shaped his own boards, but he competed on them and went on to win four world titles. It was his twin fin designs that pushed Geoff McCoy to develop the Lazor Zap and Simon Anderson to develop the Thruster.
Do you have a white whale out there, a board you'd chase to the ends of the Earth to ride and stick in your collection? What is it and why the allure?
I'm very keen to get my hands on early 80's Shawn Stussy shaped twin fin. Not many surfers today know that Shawn shaped boards prior to the launch of his clothing line. He was a very influential shaper as part of the Echo Beach movement that was taking place in Newport Beach, California, in the early 80's. He made beautiful boards with beautiful sprays. He didn't produce a high volume of them and they were sought after at the time and not many exist today.
Whenever one comes up for sale they are snatched up pretty quickly. I did miss one on eBay in Melbourne that sold for $130 recently and I saw one in a second hand store in Tokyo. I did find a nice late 70's Russel twin fin shaped by Shawn Stussy, which is the label he was working for before he started Stussy, but I'm yet to get my hands on one to ride. 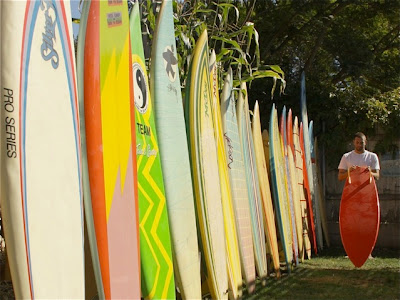