The trouble with thrusters. 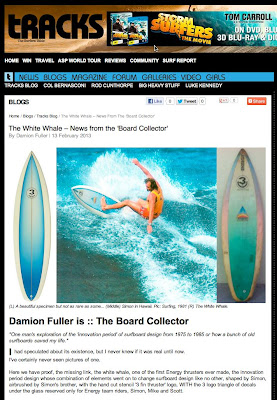 Sometimes I should just keep my big mouth shut!

A board was brought to my attention by a close Friend who was in the middle of negotiating its purchase.
No doubt if he had been successful it would have gone to a good home where it would have been loved and appreciated.

Instead I blogged it and even though I pulled the story down from boardcollector, Col Bernisconi from Tracks picked it up an re-posted it.

The good news is we now know the history of the board and where its going to be for the next two years.
The following are a couple of the comments from tracksmag.com.au

Saturday, 16 February 2013- Rachael
"This board was made for Warren Powell a hot young Victoria junior from the 1980's.


He rode the board at the Bells comp but not the big one.
It will be going into Surfworld Museum Torquay for all to enjoy."

Wednesday, 13 February 2013 - Teamenergyowner
"This board is currently in my possession. It did not sell on eBay for $49, I had an amazing amount of responses within 10 minutes so I pulled the listing because I knew it must be something greater than what I thought. I do have a buyer but after reading this now I am unsure of what to do." 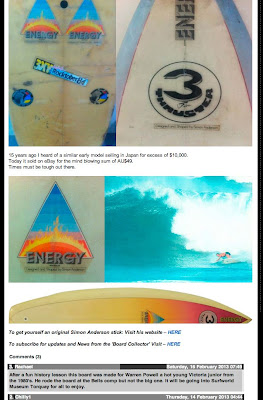 At the same time Henry wrote to me from the UK with pics of two early 80's Energy thrusters from his collection.

This one he found in Bristol.
I remember talking to Mike Newling in 1990 about how he and his brother surfed some of the biggest waves of their lives in the British Isles. Being only aware of the comps at Fistal, I was very skeptical at the time.
We now know that Britain and Ireland have some fantastic big wave spots. This board could well be one of Newling brothers pioneering UK big wave boards, as its what they would had with them and been riding at the time, and would explain the stress fractures you would get bouncing down the face of a 20ft Atlantic bomb.