Rohan wrote-
This board of Cheynes (image also from Swaylocks) is the most interesting and beautiful looking shape I think I've ever seen from this era - shaped by Terry Fitzgerald supposedly. 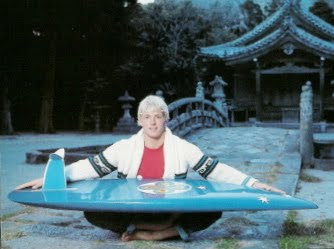 Anonymous wrote-
As I recall... Cheyne "drafted" various shapers to shape "hulls" for the "winged keel"; he seemed to fully believe in the fin and its concept but was open to "other" interpretations of surfboards. This one is obviously a Linden, and I believe that Terry Fitz may have done some as well. I know that a Florida shaper (I'm sorry- I forgot his name) made some good ones too. Check the "boat" nose super soft rails up front, and the razor sharp rail-line at the tail, the funny thing is... if you tried to "make" it look like a surfboard "should" (relatively) the board didn't work, but if you stuck with the concept above... it is/can be a pretty fun board to ride. NOT recommended for "kelpy" environments as the fin is rake-less. I like to think of it as a "single-fin fish", a thick,wide,short board designed to "skate" on smallish/powerless waves. Remember the pro tour wasn't always going to the "dream spots" it does these days. Cheyne had guts to break away, to try such a wild concept (if you doubt it worked- check the Bells finals results against Tom Carroll) while pressing for a world title. 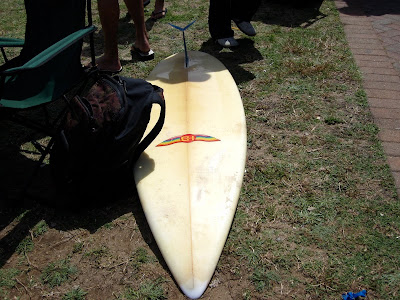 Gary wrote-
Here's a hot buttered zap with a slightly ridged keel in good
condition I spotted at the Bondi single fin meet last november. Could
be original though couldn't tell