After 3 days of solid south swell everyone was on it and it was starting to get hard to get waves at the good spots. When I got to Swarmi's at lunch time on Wednesday the cliff top was packed with spectators. I paddled out and sat inside the pack on the shelf, duck diving the close outs sets and pretty much getting the inside runners to myself. After 3 good waves thru to the beach I started panicking, thinking that the pack would catch on and move inside with me. After 45 mins I had had 7 waves, surely a record for Swarmi's. I jogged back to work and to local news was abuzz with reports of a great white in the shallows at Swarmi's. A local photographer even got a pic.
Well that would explain it why I was getting all those nice ones through the inside.
Its a pity Barney couldn't drop by every day....
News report including some nice footage of the surf 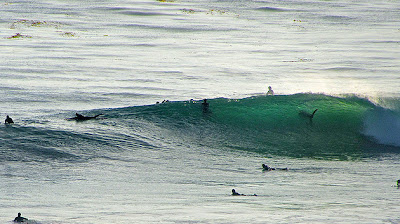 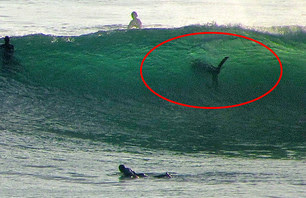 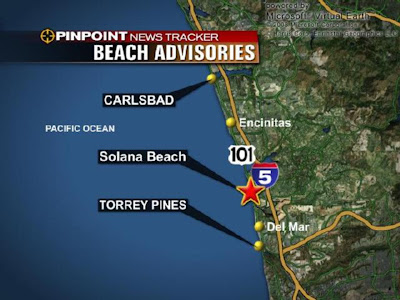 I haven't been afraid of sharks since I met a guy who flies helicopter joy flights up and down the coast from Sydney to Newcastle. He said "understand this, I see at least one shark on EVERY beach, EVERY day". Yet on average less than one person a year is killed.
Americans and Australians kill more than 3 million sharks a year in US and Australian waters.
The odds are pretty much stacked against them, not us.