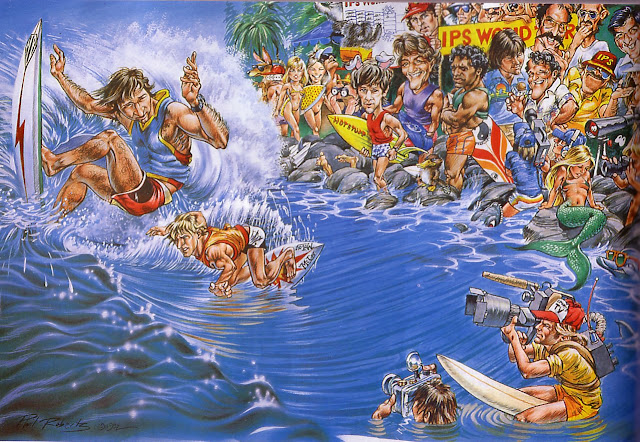 This image formed the gate fold cover of a 1982 edition of Surfer magazine and features nearly every important design from the innovation period.
This image is one of the most important for me in defining the boundries of my collection.
- Mark Richard on a Mark Richards Team Bolt / Lighting bolt single fly swallow tail twin fin.
- Cheyne Horan on a Geoff McCoy shaped McCoy Laser Zap.
- Rabbit Bartholemow on a single fin, channel bottom, rounded pin tail Hot Stuff.
- Dane Kealoa on a Town & Country Hawaii twin fin.
I have a Byrne 'Klinker' bottom twin fin ridden by Hawaiian Vince Klyne in the 82 Surfabout in Sydney, but it was shaped by Laurie Byrne in Woollongong.
Its not from Hawaii but it does have the T&C Pearl City Hawaii transfer under the glass so I say it counts.
- Simon Anderson on a Energy thruster.
Simon experimented with square 'jet fins' for about a year and rode these in the 82 Stubbies and I have one of these.