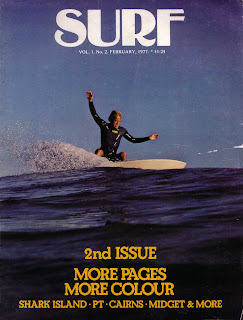 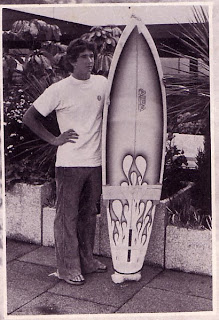 I was reading through the February 1977 edition of the Australian magazine 'Surf' and I came across the an article called "The $8000 board".
It is about Mark Richard's famous Ben Apia shaped 'Flame' stinger.
It begins 'As we go through the seasons and surf many different surfboards, we often become sentimentally attached to favorite boards. Most you like, some you don't like and occasionally you find an extra hot one that suits your own style of surfing particularly well. To a surfer, good surfboard means a lot, so when you find a good one you try and keep it it as long as possible.'
The article goes on to reveal that the board had won Mark more than $8000 in 1977 which is equal to about $3 billion in today's money.
Apparently he had a pen friend in Hawaii by the name of Ronny Romero who was writing to him about a guy named Larry Bertelmen who was ripping on these Apia stingers. So when Mark arrived in Hawaii he went to Ben's shop and bought it off the rack for full retail- $200.

What I found most interesting was that Mark, a professional surfer, had had the board for 2 years and was planning to take it back to Hawaii for a third time. My new boards hardly last a summer and I'm not even a professional surfer. When I ordered my last custom and said I want a heavy enough glass job for it to go to Bali twice Froggy nearly laughed me out of the shop. Bastards!