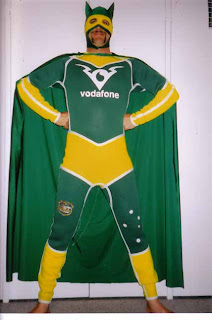 In the 70 's and 80's surfers paid a lot of attention to the sprays they ordered on a their custom boards. I know that growing up in Manly guys talked about the sprays they were going to order as much as the boards. JS was a big Dr Who fan and had an Emerald sprayed black with a full intergalactic scene with the Tradis and Daleks flying around. Fat Mac ordered an Aloha with a giant juicy hamburger on it. Max was the coolest he had his boards sprayed half hot pink and half flouro green separated by a diagonal lightning bolt. But Max went one step further, he ordered a custom wetsuit to match his board, half hot pink and half flouro green separated by a diagonal lightning bolt.
I recently tried this out. Inspired by the Wallabies world cup rugby win I ordered a custom wetsuit from Ocean One in Cronulla with Wallabies logos and badges. I took it one step further and decided to turn my footballing hero's into superheros with the addition of the cap and mask. I had a chance to present this to Captain Stirling Mortlock, Wendell Sailor, Loti Tuqiri and Stephen Larkham
For some reason they declined my offer to adapt the design for their new uniform, but they did give me a nice signed rugby jersey for good measure.