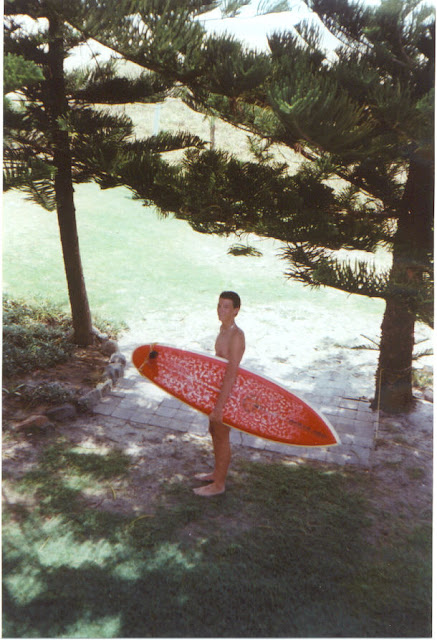 Ben wrote to say-
I bought this Hot Stuff single fin in 1979 from a mate when I lived on the Gold coast. I was heavily involved in the club scene on the Goldy. I swapped a Jim Pollard 7’2’ V channel for it. It is an early comp glass / texture deck shaped by Gill Glover for Rabbit, who rode it as a practise board and in a few heats at the Stubbies. Surfed it for about 6 months then I bought a darby 5/8 twinnie.
After going from 7/2 to 6 to 5/8 the Bunny was the one I pulled out on a good overhead day. One very early dawn patrol up on the Sunny coast I rode this Board at Tea Tree Bay barrelling of its nut with 3 mates. We ended the session with the tide and threw the sticks on top of the car and were heading up noosa hill when I see in the rear mirror Boards flying everywhere. A friend who shall remain nameless  forgot the occy straps.
Long story short, it took a tumble and being so light with he glass it bit the bitumen. So I tied it back onto the old Peugeot 203 and took her home. Put it up on the trestles and decided the resto was beyond my capability so she went to the shed. It hasn’t seen salt water since that day.