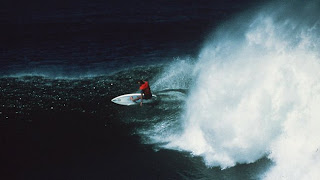 THIS is an auspicious year in surfing, at least for those inclined to mark anniversaries.
It is 50 years since the first contest at Bells Beach, Victoria, now the oldest event on the pro tour, and 30 years since the arrival of the three-fin thruster, the single most significant innovation in the history of board design. Hence the two glossy books under review.
Thrust: The Simon Anderson Story is a great yarn let down by lacklustre writing. This is one of the few stories about surfers that contain the sort of classical elements that any reader can appreciate: Anderson was a working-class kid from Sydney's northern beaches with world-class, but erratic, surfing talent. In an inspired moment in 1980 he made an innovation to his board that changed the sport forever - and happily shared it with his competitors.
Not that Anderson is bitter. Like his peers from the pre-professional era, all Anderson wanted to do was surf, and his subsequent success as a shaper has allowed him to do so. With typical Aussie modesty, he understates his own importance, and uses this book to acknowledge the people who inspired his great idea.He never patented the three-fin board design, and so earned little from it. Within two years, almost every shaper (surfboard maker) in the world was churning out versions of Anderson's boards.
But the essence of the story gets a bit lost amid a lot of verbal flotsam. Most of the book consists of Anderson's recollections, some of which involve the minutiae of insignificant surfing contests, punctuated by long quotes garnered by the editor, veteran surf journalist Tim Baker, that chop up the chronology, repeat anecdotes and, worse, remind us what a great bloke Anderson is. I'm sure this is true, but whatever happened to telling the story and letting the reader decide?
The problem is that the book takes the form of an enormous magazine feature (Baker was editor of Tracks and Australia's Surfing Life), consisting of vignette-length recollections that the reader might dip in and out of, rather than a driven narrative.
Baker's comprehensive coverage of the development of the first thruster takes eight pages, but it provides little more insight than Californian Matt Warshaw crammed into his one-page summary in The History of Surfing (2010), which includes this evocative snapshot of Anderson demonstrating the thruster's superiority in massive waves at Bells in 1981:
The twin-fin riders on their jittery little boards looked as if they'd been pushed down a steep driveway in shopping carts. The best of the single-finners drew the kind of long, elegant lines that would have been new and exciting in 1971. On his thruster, Anderson accelerated and cornered like a Formula One racer.
Thrust's failure to match this level of concision consigns it to the special-interest category, despite the richness of the underlying story.
Bells is the topic of another retrospective, by Melbourne journalist Michael Gordon, who covered the tournament as a cadet in 1973, and then for another 15 years.
Bells: The Beach, the Surfers, the Contest is a more ambitious undertaking than Thrust. The book starts with a thorough and entertaining history of the place, followed by chapters about key people associated with the beach and annual contest, from the pioneers of the late 1950s to Kelly Slater today, and including Peter Drouyn (who has since undergone a sex change) and the great Michael Peterson, who dropped out of surfing in the late 70s after developing schizophrenia and is the obvious subject of Malcolm Knox's new novel, The Life.
However, where Thrust sinks under too much detail, Bells at times suffers from a lack of it. Amid the superfluous descriptions of Bells being a special place and the waves being tricky to ride are intriguing anecdotes about the main players, such as local shaper Maurice Cole spending three years in jail for drug possession in the 1970s, from which he emerged hard and angry, and Layne Beachley overcoming appalling sexism during her first trip to Torquay.
What exactly did Cole endure during that stint in Pentridge? Who were the boofheads who abused Beachley, who has now won seven world titles? And why all the oblique references to hard partying at Bells? Too often, the reader gets the feeling Gordon ignored more compelling material in a rush to finish the book.
Almost all surf journalism has been either hagiography by magazine writers who, deep down, understood their paymasters were the surf companies who advertised in their publications, or by journalists who relied on the mystique non-surfers gullibly associate with the sport. Unfortunately neither of these books breaks from those conventions.
Fred Pawle is The Australian's surfing editor.